When I saw that you had dedicated a whole post to the discussion of Facebook I must admit I wanted to throw myself out of the window. Nonetheless I love how passionate you are about the topics you’re interested in.

I have wanted to delete Facebook many times before however I never did so. It’s really one of the only ways through which I can connect with the people I’ve met on my journeys, and a way to stay in touch with many friends. Unfortunately it’s also the only way for people to find out what I’m writing about on Hippie Picasso, or that there’s things going on in Ba-Bá. In this case Facebook is useful, as you say. Like it is for your students, FB for me is that place of “permanent record”.

I hate Snapchat though, absolutely hate it. It’s a complete intrusion into one’s intimate life and the place where spontaneity is repeated in order to be recorded! What?! Are we performing our lives? For whom? As with Facebook, we only Snap the moments in which we’re having the time of your life, however no one Snaps themselves while going through a hard situation in life. 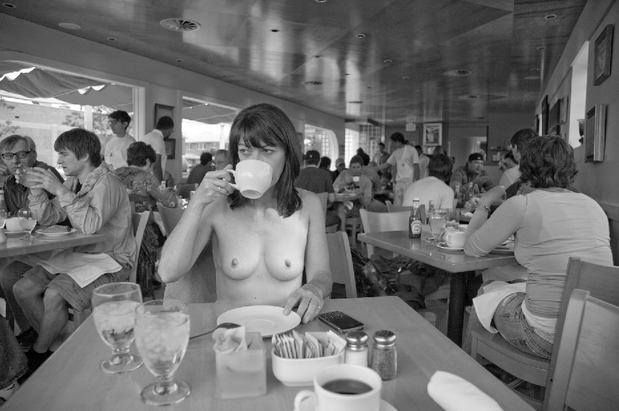 I am unable to see Micol Hebron’s Facebook page, I don’t know why, however I have been able to access her website and I have also read her article on Time magazine. I like what she says about the importance of images introducing a dialogue or asking a question. I think of art in the same way. 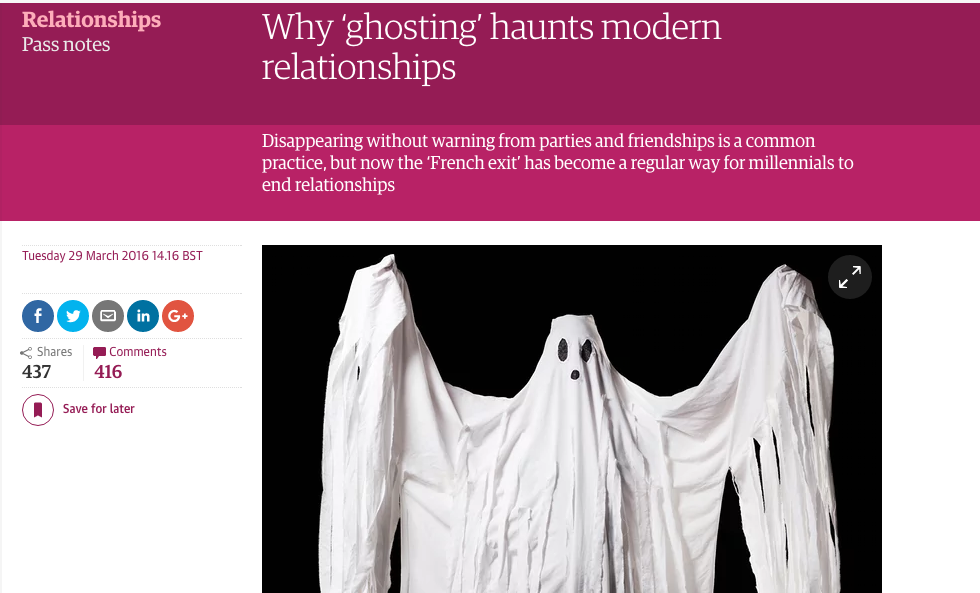 Although I agree with all of your reasons not to love FB, I have been more concerned about instant messaging lately. Nicole and I have been speaking of how likely it is nowadays to not get a response from people after they’ve read your message, or to leave conversations half-way. In fact a new term has come up to describe this action called “ghosting”. It’s when you’re talking to someone and then you just… don’t, anymore. This is also happening in the workplace. Nicole never got a reply from jobs she applied to once the decision-making process had finalised. I didn’t hear from many other things that I applied to despite having been chased to finalise the application process or having been bombarded with their e-mails. “Why not ghost when you have no real connection? When we are all just phantasmagoria in the Cloud?” the newspaper The Guardian asks.

I have been thinking of deleting WhatsApp and Facebook Chat, yet keeping my Facebook page. Of course this would not only make it harder for others to contact me, but also harder for myself to contact people, however I’ve come to realise how much more I prefer to send e-mails to others. I invest much more time and care when writing e-mails – they’re like letters for me. My friend Hannah and I have a rule in which we don’t communicate through instant social media, only e-mails. My mum would be very annoyed if she wasn’t able to stay in touch with me though, but I’ve told her that it would be great to send each other letters through e-mails. Although we would take longer to reply, our conversations would be more meaningful. It’s the same situation with you.

In terms of deleting FB, for some reason it feels harder not to log in for three months than to delete it completely. It’s wiser though, I feel.

THE RULA FARM! What a dream! A small garden in your backyard sounds heavenly! These initiatives should be introduced more in LA. You’ve all got back gardens and front porches, but yet most of them only serve as parking spaces… Urgh, America.

Talking about farms… there’s a few new updates on my housing situation. On Friday I travelled to Winslow, in Buckinghamshire, to do a weekend of silence guided by a guy called Michael. Michael and I met each other by chance last year in an event during International Yoga Day. We were both helping out and standing next to each other behind a stall. Michael was a gardener and a meditation teacher, and after spending a whole day together he gifted me with a mala that he had made and invited me to attend his meditation class the following Wednesday, which I obviously went to.

After attending Michael’s free Meditation Wednesdays for over a year, I have gained huge insight into Michael’s life and that’s what most fascinates me about him, and why I follow him wherever I can. Michael had suffered from severe deppression and heroin addiction while growing up, however life gave him a second chance and he decided to become a gardener and slowly recover through spiritual practice.
After two years of free meditation classes and mala-making, Michael has now got quite a crowd of followers, who a few months back asked him to start running his own silence retreats, and so he did.

Michael now runs monthly silence retreats in different parts of England and this weekend I was able to attend one of them in the most magical of places: Redfield Community Centre.

It’s truly a miracle that the retreat was celebrated here as the community was precisely what I had been looking for.

Redfield Community is an intentional community and housing co-op set in 17 acres of gardens, woodland and pasture, surrounded by farmland. They have sheep, pigs, chickens, bees… They live completely self-sufficient and make all decisions by consensus.

Although I wish I could commute every day from Redfield to the RCA, it’s simply too crazy. I therefore began searching for similar spaces within London, and to my surprise I found three:

Yesterday I went to visit them all and I was so, so fascinated and happy! I would really love to live in one of these places however the entry process is quite complicated – almost like entering an MA programme – which at the end of the day can only be a positive thing.

This is what the tapestry looked like when I took a photo of it in the fashion studios. Now I’m transforming it into a very functional outdoor jacket with one of Kingston’s graduate students who will also be attending the RCA to do MA Fashion. I found this tent dress online the other day and thought it was genius: 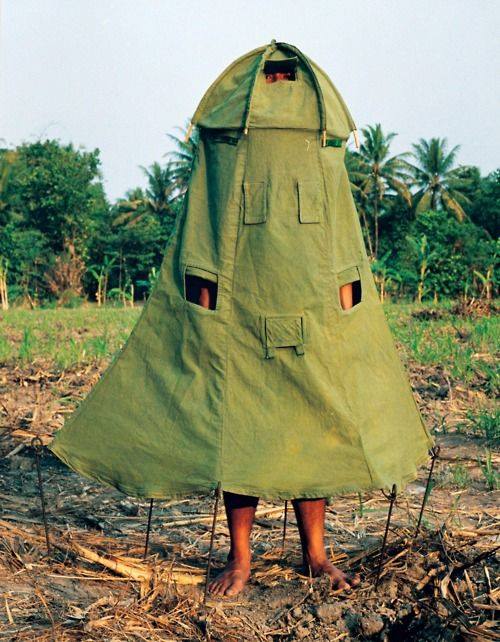 That’s right, on the day of the exhibition you had to travel to different places to see each piece. Two pieces were placed indoors in the gallery space, and the Book Club and The House were located outdoors. Unfortunately I don’t have a map.

The House is becoming an increasingly interesting place. We’ve already passed the deadline by two weeks and we are still living here full time. It feels like it’s acquiring some sort of political stance now. In terms of human interaction, people have been able to sign a “guest book” when visiting our place. Additionally we receive many cooked meals from friends and visitors, and recently had an interview by a PhD student from Milan.
Last week I sent an e-mail to the RCA asking for permission to move the structure there when I officially enrol in September. To my surprise the tutor sounded somewhat keen on it, and asked for more specific details on the project. Let’s see…

Yes, Nicole is my partner in the Book Club, and we both agreed that it was really important to maintain our individual practices, so she does her own thing while I do mine. Nicole is a realist painter. She has always been very interested in painting old people and last year she travelled to the Isle of Wight to meet the oldest person in Britain. She spent the whole day with Doris and eventually did a realist painting of her. Nicole’s work is very much about “the journey”, just like mine is. For our BFA show Nicole painted a series of portraits using maths. She had no part in the decision making of most of her paintings: she created algorithms that decided whom she had to paint, which colours to use, and which areas of their face she must paint, etc. It relates to Andrea Zittel’s concept of “living by rules to attain freedom” in a way.

My relationship with her has gone through really different phases since the project started. At first it was all about the intensity and the excitement of having found a person that is willing to go to such extremes for art. We were constantly speaking about all the things we could do once the project was over, and even planned a whole summer of the edgiest and most creative backpacking. On the second week, Nicole fell very ill and slept at home home six nights, which made me feel quite upset. Then she received the great news that she had been selected to work as sales assistant in the new Tate Modern, which would mean that all of our summer plans would be crashed by her new employment status. I was again disappointed. However a few days later while I was at the tailor’s asking how I could design a pattern for a dress, I was asked by the boss (this really dodgy middle-eastern man) if I would like to work part-time as receptionist while at the same time learning from Hanna, the tailor, to make my own clothes. I was really suspicious and told him that I would take some time to think, however later I thought that this was happening for a reason. I had been wanting to join a summer tailoring course but they were too expensive in London, so this seemed like the perfect chance. I had a really good first week working with them, however later I found out that Hanna would be taking a 6-week holiday to go to her country and that they wouldn’t need me any longer. So I’m unemployed once again and currently thinking of hopping on a plane, to anywhere, until the 13th of July that my mum comes to London. Nonetheless you know how much I despise travel for the sake of travel, so I’m trying to look for a good enough reason to go somewhere.

As you start your new project Find Me, I begin Where I Slept, which is a simple photo documentary of the places where I sleep each night. This is what I’ve got so far: 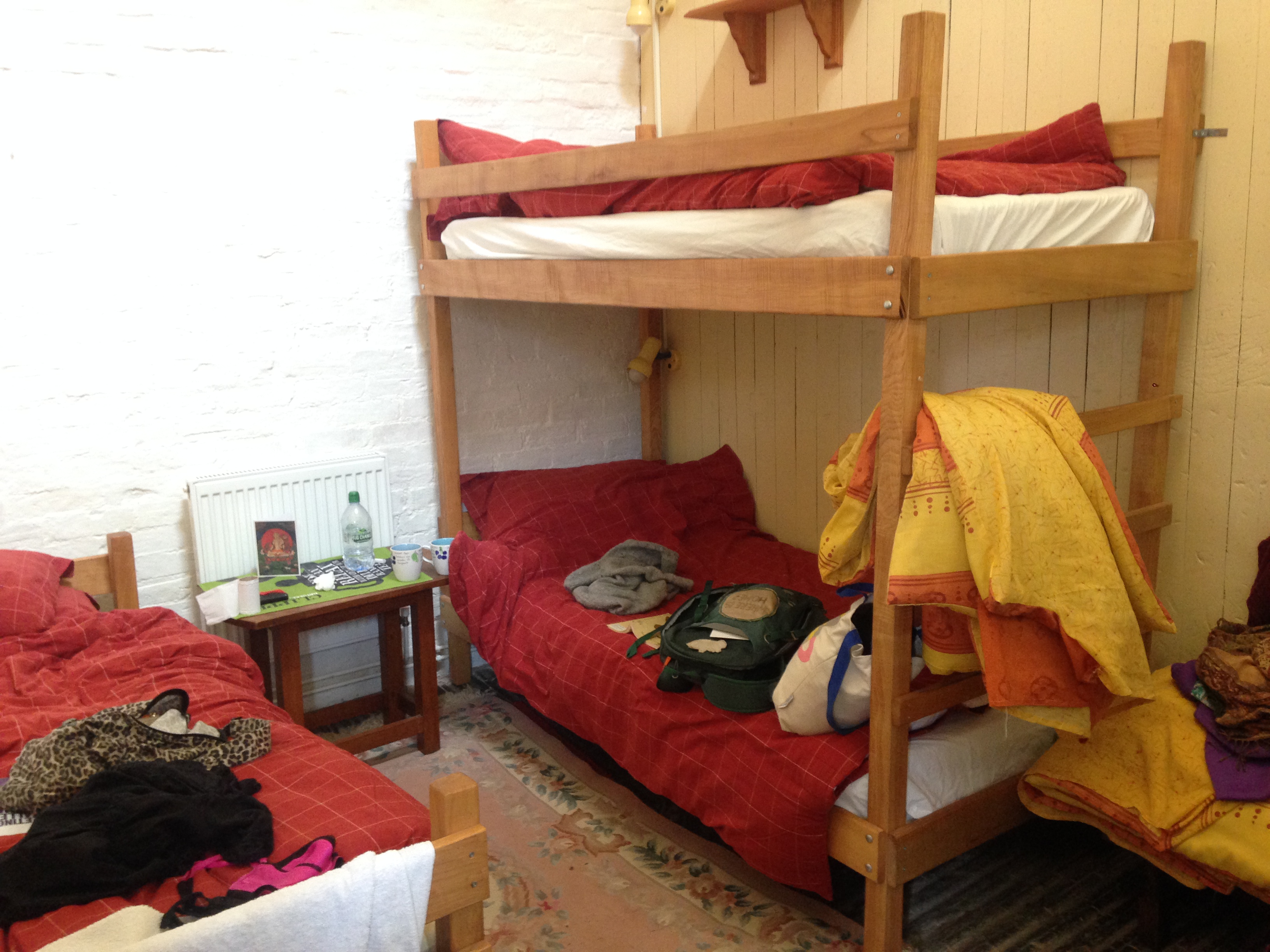 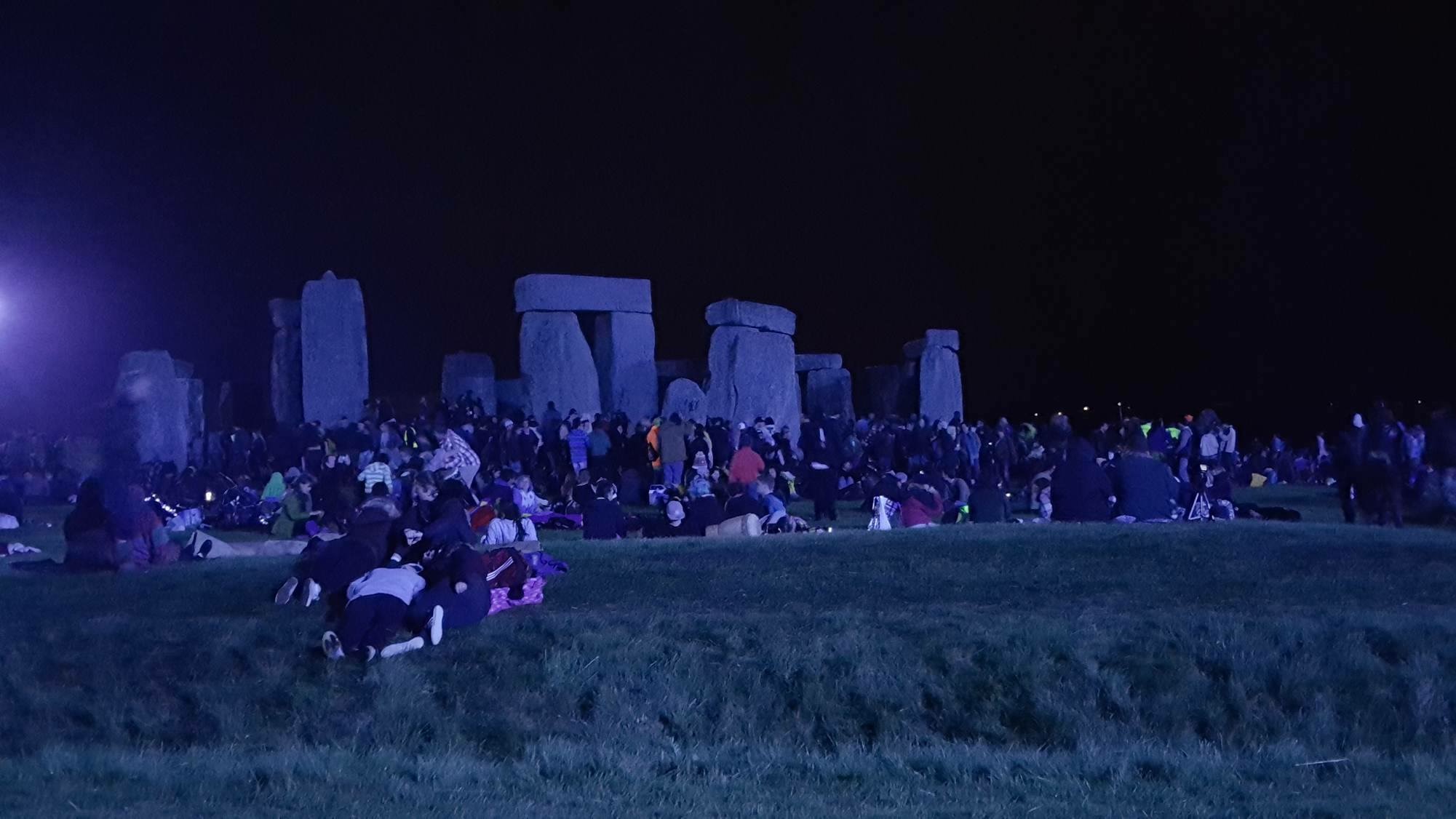 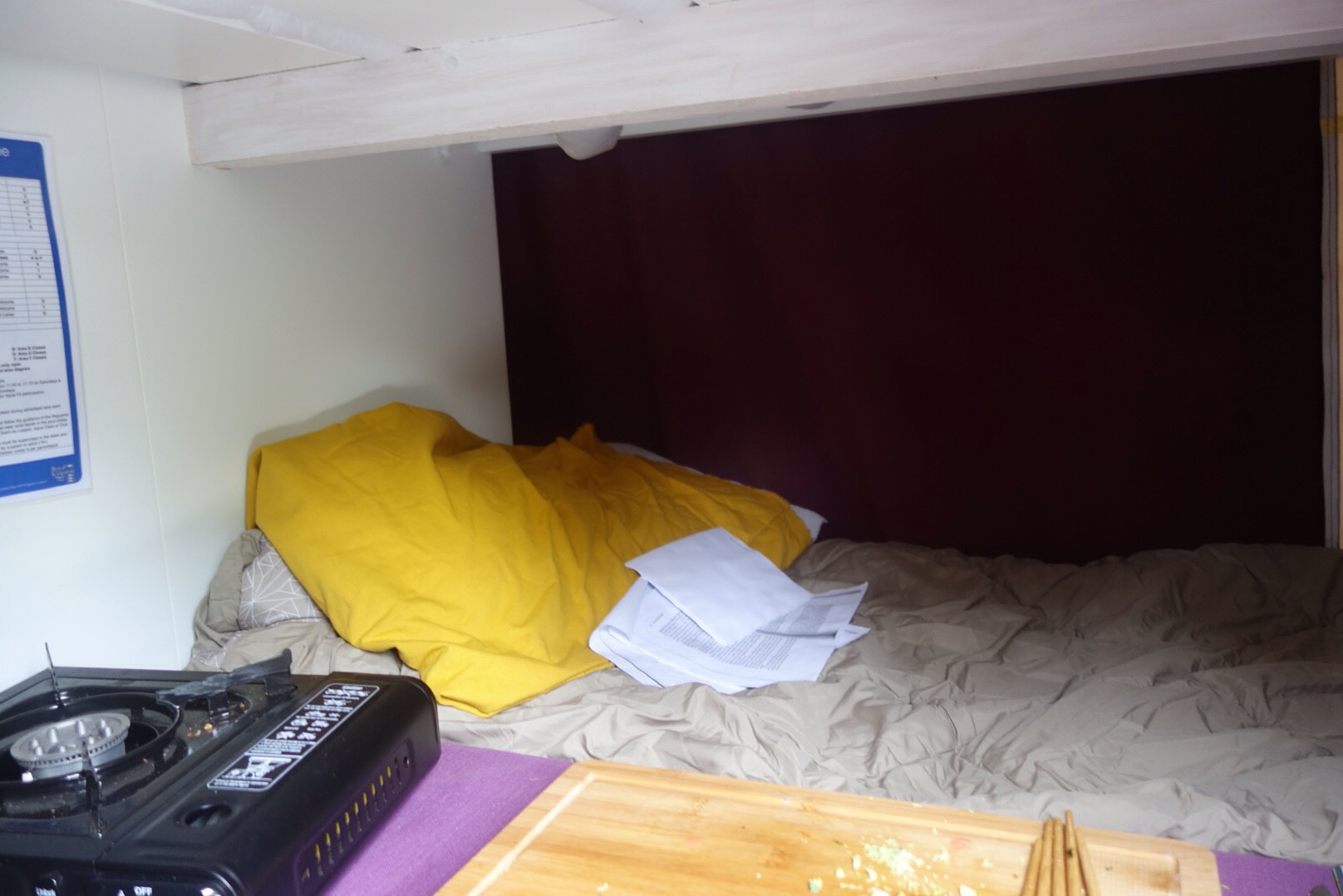 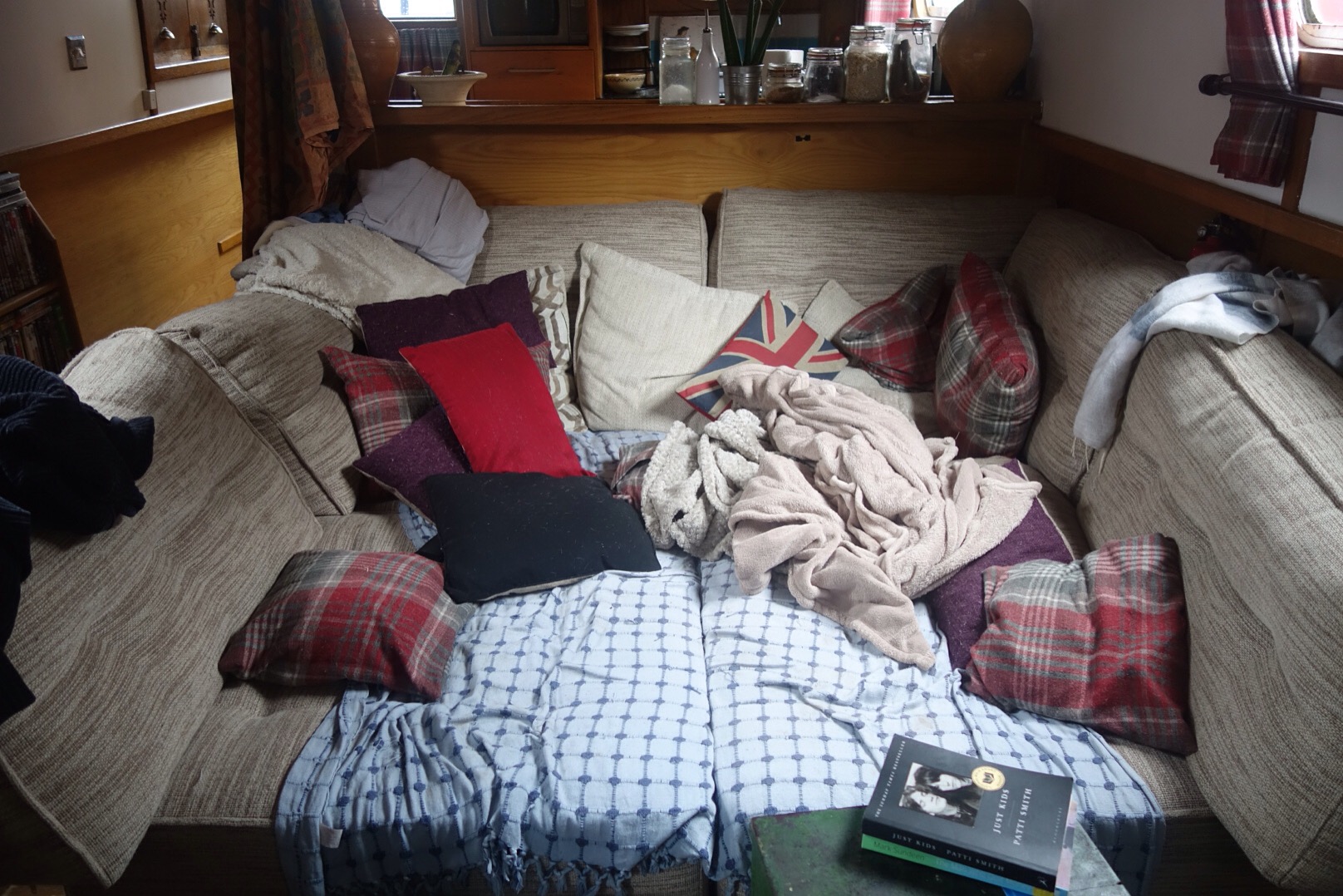 This has been a hell of a lot of writing Glenn! I hope it wasn’t too heavy! Looking forward to hearing from you again, and hopefully will reply to you from some remote place in the world. 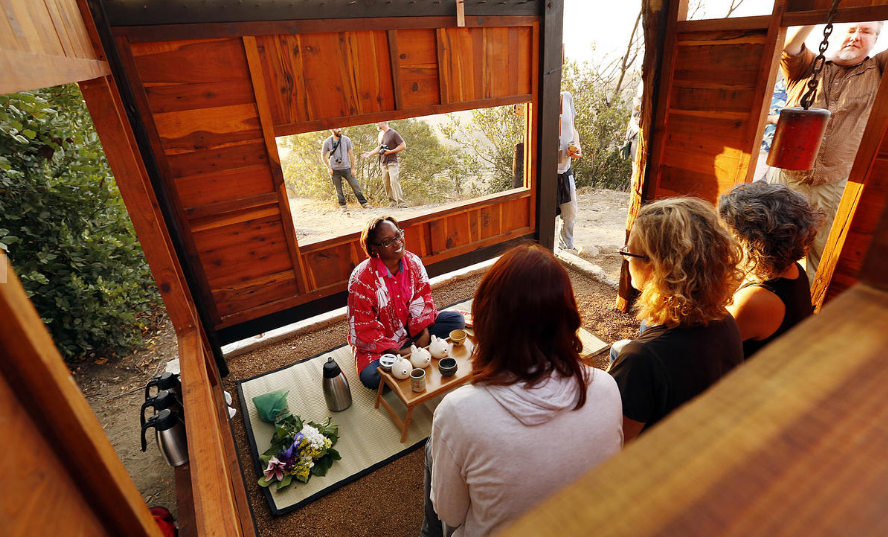