Greetings to you in London / Málaga / India, or wherever you are today. Summer has flown by. My summer class is entering the last 3 weeks now, and then Fall starts right after that. Our winter, as typical, was very mild, but then May & June were very lackluster. I paddle the surf ski all year long, and winter paddling (haha, in the “harsh” winters of Newport Beach, CA) is easy and fun, but I’ve definitely been longing for some nice toasty summer days. So, of course, a week ago as things really heated up, I got sick! I hope it’s about over now, which is pretty fast for me – colds usually drift into bronchitis and take weeks to fully be gone.

Have you made any more videos? Or thought any more about video space vis-a-vis text space? I do like something about text space. Who knows, maybe it’s just familiarity! Video obviously has so much power and currency! In light of your video experiments, I made a video for you:

I know I told you about my new project with Alyssa, Shame Wrapped in Repulsion. I think you have an article you wrote that you might be submitting.

Speaking of videos, Alyssa and I got together with another friend, Natalie Mik, to talk about the project. Or at least to try Burger King Mac ‘n Cheetos. We made a video also:

I’ve just discovered a couple of cool web tools, Typeform and Zapier. Typeform is a piece of forms software. It pretty simply collects answers to stuff. But it’s quite elegant the way it works. It asks the questions one at a time. That’s a small thing, but it makes the experience feel more conversational and a bit less like just filling in some form.

The fancy part is when you use Zapier. Zapier is a “webapp automation service.” It lets you take stuff from “A” and do something with it at “B”. So I made a “zap” that takes the output from someone filling in a Typeform, and turns it into a post on WordPress. Actually, in the last 2 days I’ve made 3 sets of Typeform > Zapier > WordPress. The first one is to submit work for Shame Wrapped in Repulsion. You can use the form on the Shame Wrapped in Repulsion website, but I’ll include it here since we’re talking about it:

Feel free to give it a try – either to submit for real, or just to play. I can delete anything you might post just as a test. And about 10 minutes after you hit the final submit button, it’ll be live on the Shame Wrapped in Repulsion website.

Even though I just bought this domain a couple of days ago (yes, apparently I’m drinking internet whisky again!) I already forget exactly how the idea evolved. I feel like it was connected to thinking about Shame Wrapped in Repulsion but I’m not positive.

In the early days English Wikipedia used an “Inclusionist” model. These days they’ve switched to a “Deletionist” model. I wrote about it here:

English Wikipedia’s deletionist model means it’s a bit harder to get new articles in. I’m not sure being in Wikipedia really matters, but I think it is a bit of a vanity thing for some peeps. I thought about the 1863 Salon des Refusés, when the official Paris Salon had rejected Edouard Manet and many others, and the now famous Salon des Refusés was created.

For every life that Wikipedia has decreed Not noteworthy enough to enter our hallowed web servers, I’ve created the inclusive space of Rejectapedia.

Rejectapedia.com is a website. And a Typeform. And a Zap. So all you have to do is fill in the form below, and 10 minutes later, there’s an article about you on Rejectapedia.

It’s pretty fun – I hope! – I just made it live about an hour ago. If you have a chance to play with it, do LMK if you have any improvement suggestions.

Besides Repulsion & Rejectapedia, I’ve also made Typeform-Zaps for my upcoming fall class and also for my family tree. I love that peeps can just enter info and then it’s live on the web without me having to go in and publish or move anything. Hopefully we won’t wind up overrun by spammers, trolls or bots! 😮

I knew that YouTube was inconceivably huge. I knew that they get 100 hours of video uploaded every minute! That every 2 weeks YouTube users produce more hours of video than the entire history of broadcast television. And yet I hadn’t fully thought about the resonance of what this means.

I interviewed Drew Daniel & MC Schmidt of Matmos some time back. And at one point in the conversation Drew said,

Who needs Orlan when you’ve got Extreme Makeover?

Within days of Burger King releasing they’re more-ridiculous-than-ridiculous Mac ‘n Cheetos, there were zillions of YouTube vlog reviews of Mac ‘n Cheetos. Interestingly so many of them were as much about the reviewer as about the food item. There were definitely shades of performance art. Some of them were kind of abject. Have you seen any of the “100 Coats” videos? 100 Coats of lip gloss or nail polish, etc.

Drew seems to be asking his question again:

Who needs Paul McCarthy when YouTube is filled with vloggers doing 100 coats of everything they can think of?

For sure people like Orlan, or McCarthy, or Marina Abramovic have qualities, sensibilities, and aesthetic elements different from almost any YouTube vlogger. The artists know they’re making art, and I think the vloggers self-perceive differently. Still, even if it’s wrapped in pop culture, they are looking at life from different angles, and perceiving culture in new ways. I think Warhol was amazing at seeming so surface, and yet having so much powerful depth to the work.

Virginia Heffernan’s new book Magic & Loss: the Internet as art, came out a few weeks ago. I’ve been waiting for this book for a good 3 years! Maybe I expected too much. In a way I was disappointed. On 2nd reading, I realized that I respond differently to her different chapters. In the Music chapter her ideas just ring false for me. But in the Text chapter I found her ideas to resonate so powerfully.

She noted that in the past, kids playing might have dreamt of being Luke Skywalker. But that now they dream of being George Lucas. She extends this idea to say that in the past Storytellers were the creators of music, books, film, and they sold their creativity to an audience. But that today Platform Developers are the creators, and it is the Storytellers who are the new consumers, who pay to tell their stories. Pay in ways like Broadband Fees, Hardware Expenses, Subscription Fees, Data Mining, Advertising.

My graduate assistant Rhiannon messaged me on FB that she’s looking for proposals for her upcoming Philosophy in the Bedroom project. She suggested I might like to come eat Mac ‘n Cheetos. I thought perhaps I could do some sort of video chat with you… from Rhiannon’s Chinatown Art Gallery Bedroom in LA… to wherever your bunk bed or sleeping bag happens to be.

She wants proposals by this Sunday, 31 July.
And then the performance is between 9pm Saturday, September 3rd and 9pm Sunday, September 4th, 2016. Or +8 for London, so between 5am Sunday and 5am Monday, 4/5 September.

Perhaps an hour like 8-9am Sunday morning in LA / 4-5pm Sunday afternoon in London, could work if you’re interested in doing something.

Of course who knows what city you’ll actually be in and if you’ll be busy or even have internet! 🙂 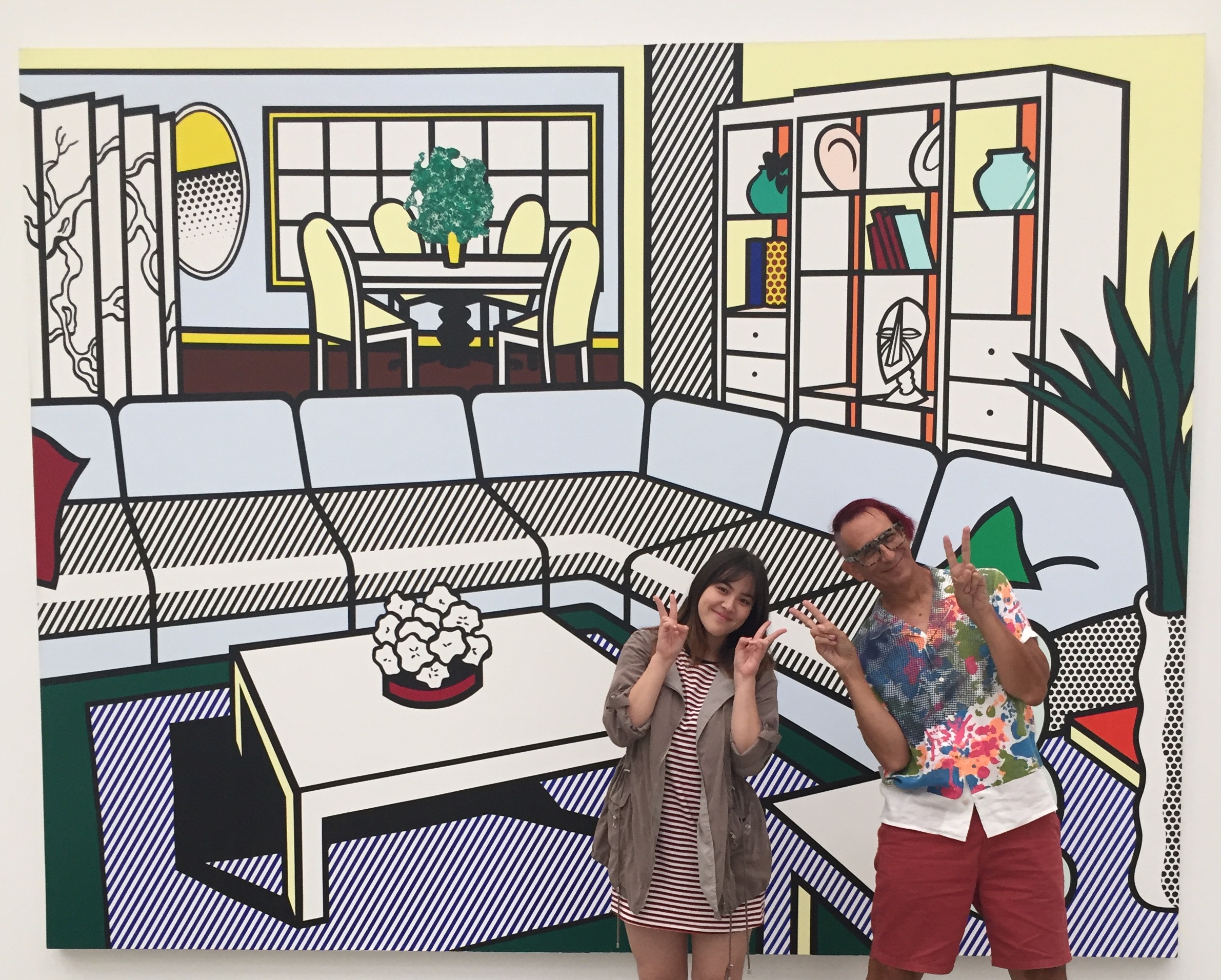 With one of my students, Lisa Berhnauser, in front of a giant Roy Lichtenstein painting at The Broad in Los Angeles. Photo by Layla Hadidi.

That’s so cool that you found 3 coops in London. Funny that their application process rivals getting into graduate study at RCA! Have you applied to any of them? Or are you off in a different direction?

And wow that RCA might let you move the bunk bed there! What’s the news on that? Is Nicole also going to RCA, or does she have other post-baccalaureate plans?

Any updates on the tapestry turned jacket project?

Nicole’s paintings sound like they have a little bit of kinship with many of John Cage’s chance process works, and all the I Ching coins he threw.

When he was at Crown Point Press in San Francisco there were some rather complicated prints, many elements of fine etching, and they could be inked different ways depending on the values the coins came up with. Or not printed at all. One of the printers asked him, if a given plate was not going to be printed on a given print in the edition, did they still need to ink that plate anyway?

I love the Where I Sleep project!

Also, I can’t remember if I commented on them before or not, but in your letter before last you included some street photos you took in China. They were fantastic!

Your last letter was dated 23 June, the same day as the Brexit vote! What do you think of all that? It seems like now everyone is saying that Brexit and Donald Trump are the same thing: white privilege trying to reassert itself.

I heard a Michael Moore interview where he said Brexit was like someone playing in the major league, and asking to be sent down to the minor league. Meanwhile, in the last poll I heard about, Donald Trump is ahead of Hilary Clinton 48% to 45%. But that was after his “bounce” (extra support) from his convention last week. So perhaps Hilary will get a bounce after her convention this week. It’d be nice if America could avoid its own Brexit follies. Or maybe we’ll be building The Great Wall of America.

So when does school start? Are you in India? So many different things on your plate! So many activities! How did it go with your 1-way exchange artist from Arizona?

Wishing you lots of luck as you head into grad school @RCA! 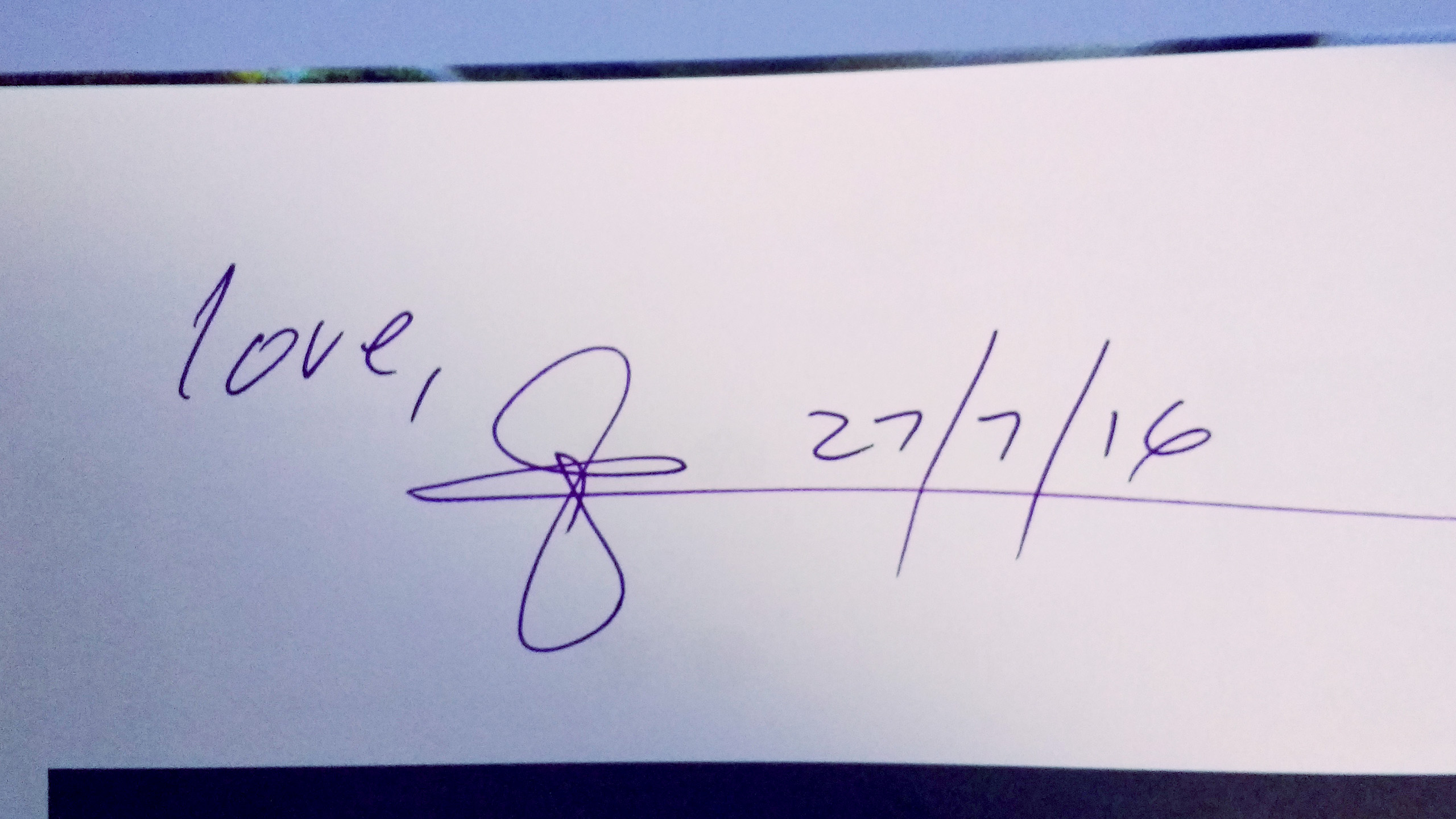