Hi Marta! It’s Tuesday, the 3rd day of your 2 weeks with 11 other artists & writers at Andrea Zittel’s Wagon Station Encampment in the California desert at Joshua Tree.

I wonder what you’re up to today? I’m looking forward to hearing about your experience these 2 weeks.

I found myself in Laguna Beach this afternoon. Just a few feet below the pristine, white galleries of the Laguna Art Museum are tidepools in the rocky shores of Laguna.

I think of tidepools as small adventures. Little pockets of water that get stranded at low tide. Small, yet teeming with life. An anemone. Tiny fish. Hermit crabs in their borrowed shells. A miniature ecosystem. A world within a world.

So often we don’t take the trouble to appreciate the depth of richness of these spaces. The jewel tones of the little anemone’s many short tentacles. The tenacity of the hermit crabs endlessly on a journey to nowhere.

Of his time studying with John Cage at Black Mountain, Allan Kaprow said he learned that:

Tidepools and Automatic Drawings both seem simple at first glance. But as you look deeper, into the tiny organisms in the tidepool, or the network of lines in the drawing, it just seems to go and go.

Tidepools and Automatic drawings have another thing in common: my dreams!

Years ago, before I started scuba diving, I used to have this recurring dream of being trapped underwater. “Trapped” isn’t really the right word. I think it suggests terror, and these dreams were not that at all.

I’d be in a large pool or perhaps lake or ocean. There was some sort of sheet over the pool. Like a giant aluminum cover. Or perhaps ice, although it wasn’t cold. I didn’t have access to the surface. But it was a calm experience. I simply decided to take in a mouth full of water, and then like a fish “strain” the oxygen from the water.

I didn’t have these dreams very often. Maybe once or twice a year. But over time I had the dream many times. Always the same location. Always calm. The amazing part is that later on, once I started scuba diving, I never had the dream again. 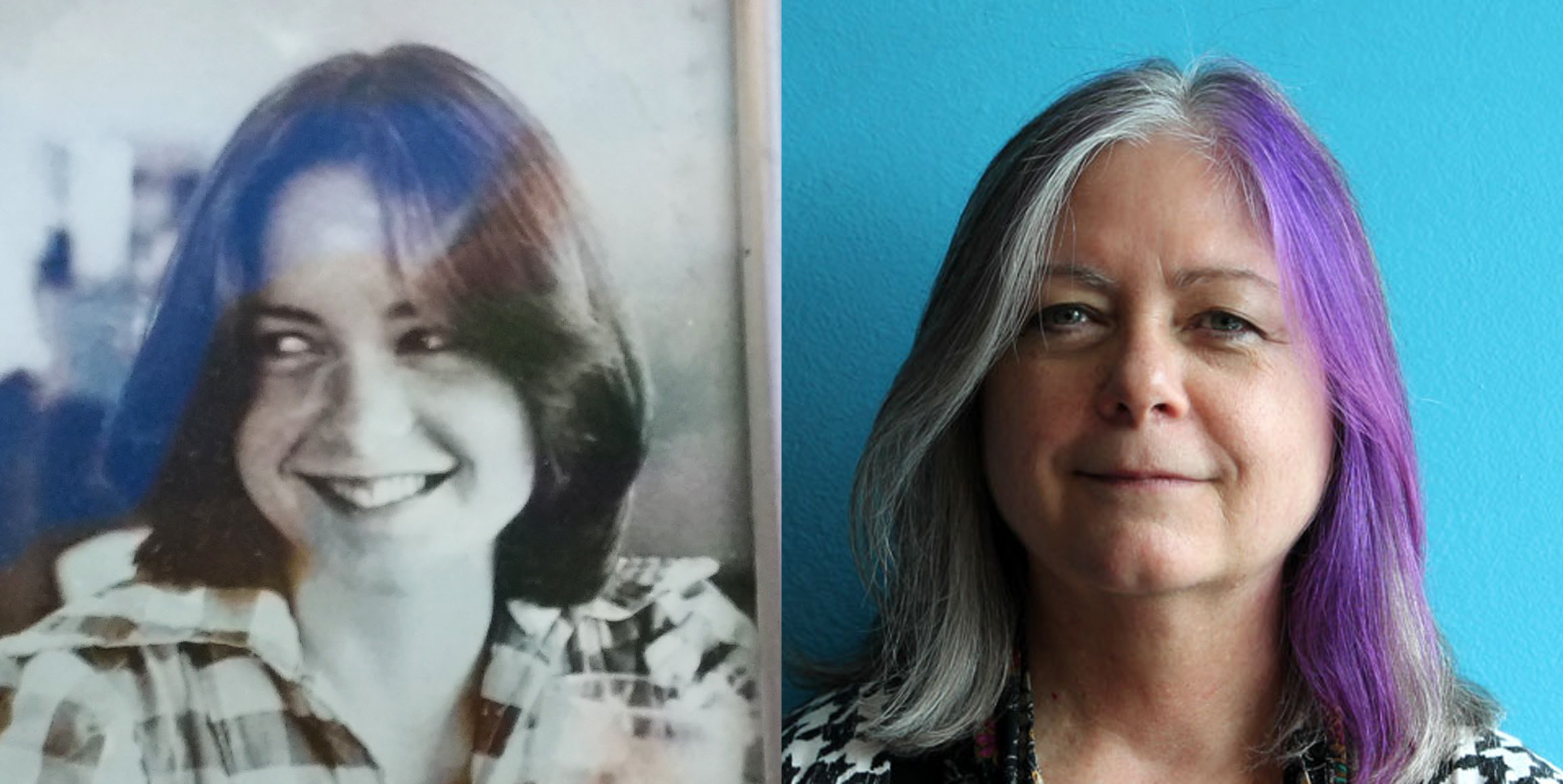 Stacey Giachino then and now: the 1st frame is a photo of Stacey drinking a cup of tea in the dining room at UCLA University Cooperative Housing. The photo was taken by my roommate Jack. The person Stacey is looking across at and smiling at is me, and I think what her expression roughly translates as is something like “why the fuck is this guy pointing a camera at me when all I’m trying to do is enjoy a cup of tea?” The 2nd photo I just found on the net right now. Apparently Stacey is living and working in Seattle. It’s kind of remarkable the way she looks the same. Only, you know, older. And with the cool silver hair. And OMG, purple!

When I was at UCLA, Stacey Giachino, Steve Carpenter, Jeff Obrow, and a bunch of other people, and I all lived at University Co-operative Housing. Or just “The Co-op.” Steve and I took cinematography class together. I remember we strapped a 16mm camera to a skateboard and rolled it down the hilly street The Co-op was on.

I guess a semester or two later Jeff moved into a nearby apartment and one night there was a party at his place. Maybe it was an Academy Awards watching party. We were all so excited about filmmaking. Later in the evening someone had the idea to drag out a Ouija Board. Jeff couldn’t find the planchette (pointer thingy that you put your hands on) so he said,

I wonder if a coffee can lid will work?

Jeff took a plastic lid and cut a hole in it so you could see the letters it went over. I think he threw a little baking powder on the board so it would slide easier. I think maybe a couple other peeps used it first. It sort of moved around a bit. Nothing too that impressive. Then Stacey and I were going to try it. I wasn’t exactly excited about experiencing this strange thing. Then Jeff threw in,

Oh, by the way, you lose your immortal soul if you do this.

which didn’t help. But we gave it a try. We put our hands on the plastic coffee can lid. And it flew all over the board! The motions were fast, decisive, and dramatic! I think the “spirit’s” name was Tausi, and it said that I was doing “good work.” The planchette moved so fast that sometimes our hands would fall off. I think with Ouija Boards peeps often wonder if the the other person is pushing it. But I trusted Stacey. And since we could barely keep up with it, it seemed much more like “Tausi” was leading us than like us pushing the planchette.

Over the years I’ve played with Ouija Boards on occasion. Not often. Maybe once every few years. About half of those times it’s been dramatic. One night Jenny and I used one for 3 or 4 hours. My legs were aching from being in that pose for so long and I was dying to stop, but Jenny was asking so many deep and fundamental questions about her life that I didn’t have the heart to end our long session.

Back when I was 19 or so and had that first Ouija Board experience with Stacey, I don’t think I had any real “theory” as to how Ouija Boards worked. I think the marathon session with Jenny helped me formulate my thoughts. Once again, the movement of the planchette felt “honest.” I knew I wasn’t pushing it. And it didn’t feel at all like Jenny was. It didn’t feel that way, and it wouldn’t have made sense. Jenny was asking deep, personal, life questions, and to be pushing the planchette around to spell out answers for herself would have been silly. This was a serious night for Jenny.

What I believed that night was that in a manner of speaking Jenny was “pushing it”. But not in the obvious and trite sense of move the planchette from k to e. Rather I felt that Jenny’s conscious mind was asking questions, and her subconscious mind was giving her answers. Jenny was accessing a deeper, more remote part of herself. A part of herself that she might have been able to access in other ways, but that this was a simple and elegant medium through which she could have a conversation with herself. Or with her inner self. Or with her soul.

I am a material boy

Speaking of souls, over time I came to reject Jeff’s immortal soul comment. The comment had served to heighten the intensity of the moment on that night back at UCLA. But it wasn’t my world view. I grew to believe less and less in a dualist universe with a spiritual realm inaccessible by the physical realm. A dualist universe of heavens and hells. Of spirits like Tausi who could sit on top of the planchette and move it around to tell you things. Spirits like Tausi or the Oracle at Delphi who had one foot in this reality, and one in another supernatural realm.

I’m not a material boy like Madonna is a Material Girl, but I have come to believe in materialism. In reductive biology. That in principle, in the fullness of time, that all things are knowable. Accessible to mere mortals. Accessible by science.

For me the beauty of using a Ouija Board with Stacey or Jenny wasn’t that Tausi or anyone else was reading a cosmic ticker-tape to us, but that in a sort of meditative state we were able to share something deep, fundamental, and pre-conscious. We were able to let the dance of the planchette speak of things within.

As my philosophical perspectives became clearer, using the Ouija Board became more problematic. Once or twice I recall using it and unlike Jeff’s immortal soul comment, I’d explain the perhaps more accurate, but definitely more tedious, ideas I had about what went on in the experience. By the time I blathered on about all that philosophy, there wasn’t much room left for the actual mystery and magic of the dance of the planchette. 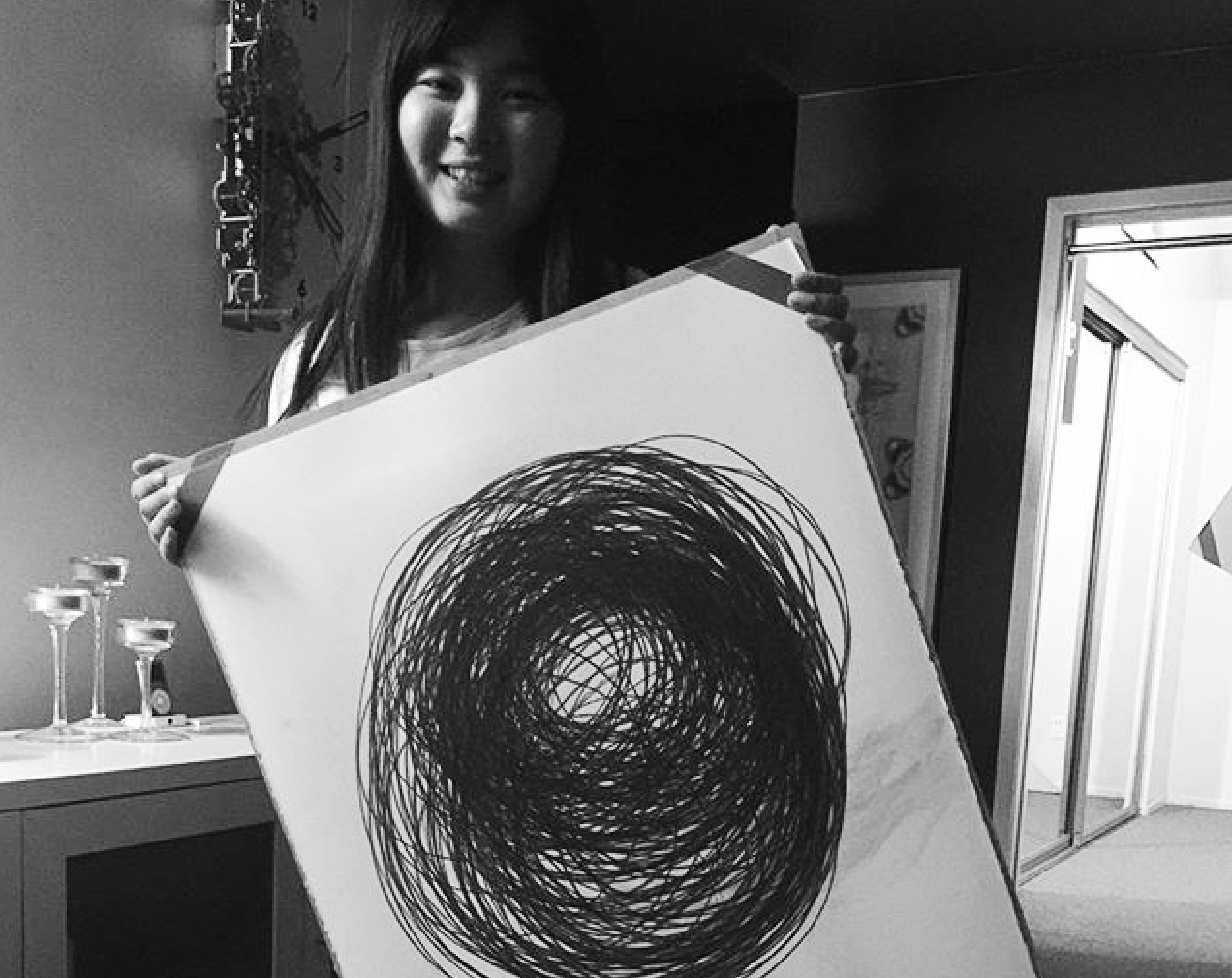 Joey holding the automatic drawing that she, Ada, and I made in the early hours of the morning of your 21st birthday. I’d never tried a 3-person automatic drawing before and I sort of thought it wouldn’t work. That there was something special about the connection between 2 people. Instead of 2 people putting both hands on the pencil, Joey, Ada, and I each put one hand on it. The experience wound up feeling a lot like the 2 person experience. It was vibrant and dynamic.

One night in 2008 Lee Le and I were playing with a Ouija Board here at my place. The planchette was moving around freely, but it wasn’t spelling any words. Since it wasn’t spelling anything anyway, it occurred to me that it might be interesting to replace the planchette with a pencil and put a piece of paper on top of the board. That night Lee and I invented Automatic Drawing.

Or at least that night Lee and I thought we’d invented Automatic Drawing. Doing a little research later I found that our invention, or perhaps discovery is a better word, had been discovered many times across the centuries. Perhaps across the millennia.

Like the planchette that Stacey and I had held back at UCLA so long ago, the pencil that Lee and I held had swift and decisive movements. It was a dramatic and exhilarating experience.

One of my students, Danielle Garcia, making an automatic drawing with her mom. You can see drawings from a few more students on the BeachArts website, and on the RULA website.

The funny thing is that on the few occasions I’ve tried to use a Ouija Board since Lee and I discovered Automatic Drawing, the Ouija Board hasn’t worked.

It seems a bit like my dreams of breathing underwater. They seemed to serve some “purpose” before I became a scuba diver. But they were unnecessary once I actually breathed underwater.

Once I’d experienced Automatic Drawing, the Ouija Board seemed, by comparison, too contrived. With Automatic Drawing I don’t feel compelled to launch into any philosophy or psychology explanations first, we can just put our hands on the pencil and let it roam across the paper as it will.

As you and I experienced a few nights ago, at 12:05am, in the 1st hour of the day of your 21st birthday, the pencil just seems to move fluidly and dynamically. It does feel as though the pencil has a will of its own. Like the pencil has agency. 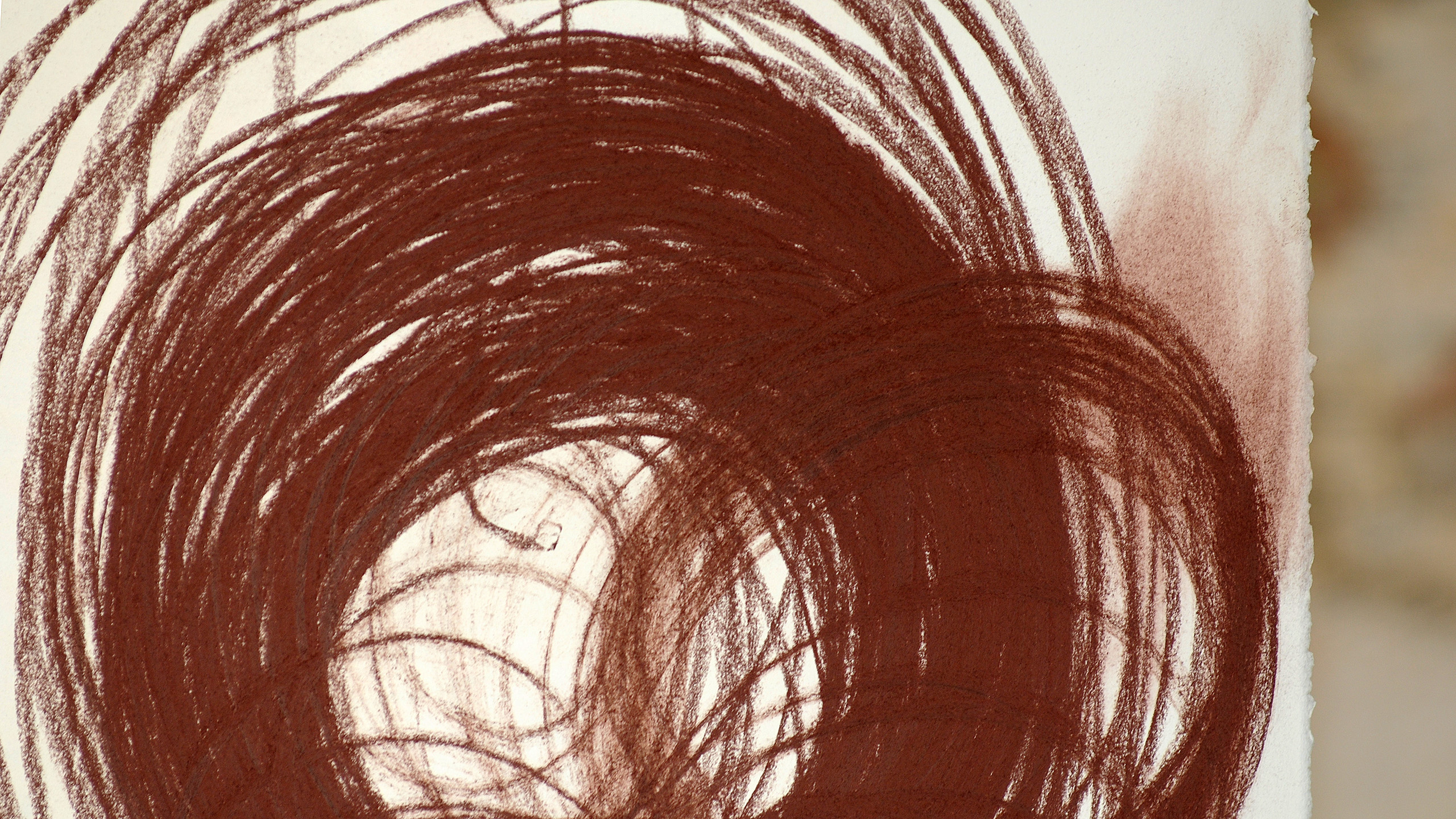