Sorry for such a late reply! I’m happy that our conversations take place in the form of letters rather than via social media… Otherwise I would feel the terrible pressure of having to reply as soon as the “read” sign had been displayed – and if not I’d feel guilty for having read it but not replied. Phewww!

I’ve been crazy busy setting up my degree show. The opening is this Saturday and this is what it’s starting to look like (!!!) : 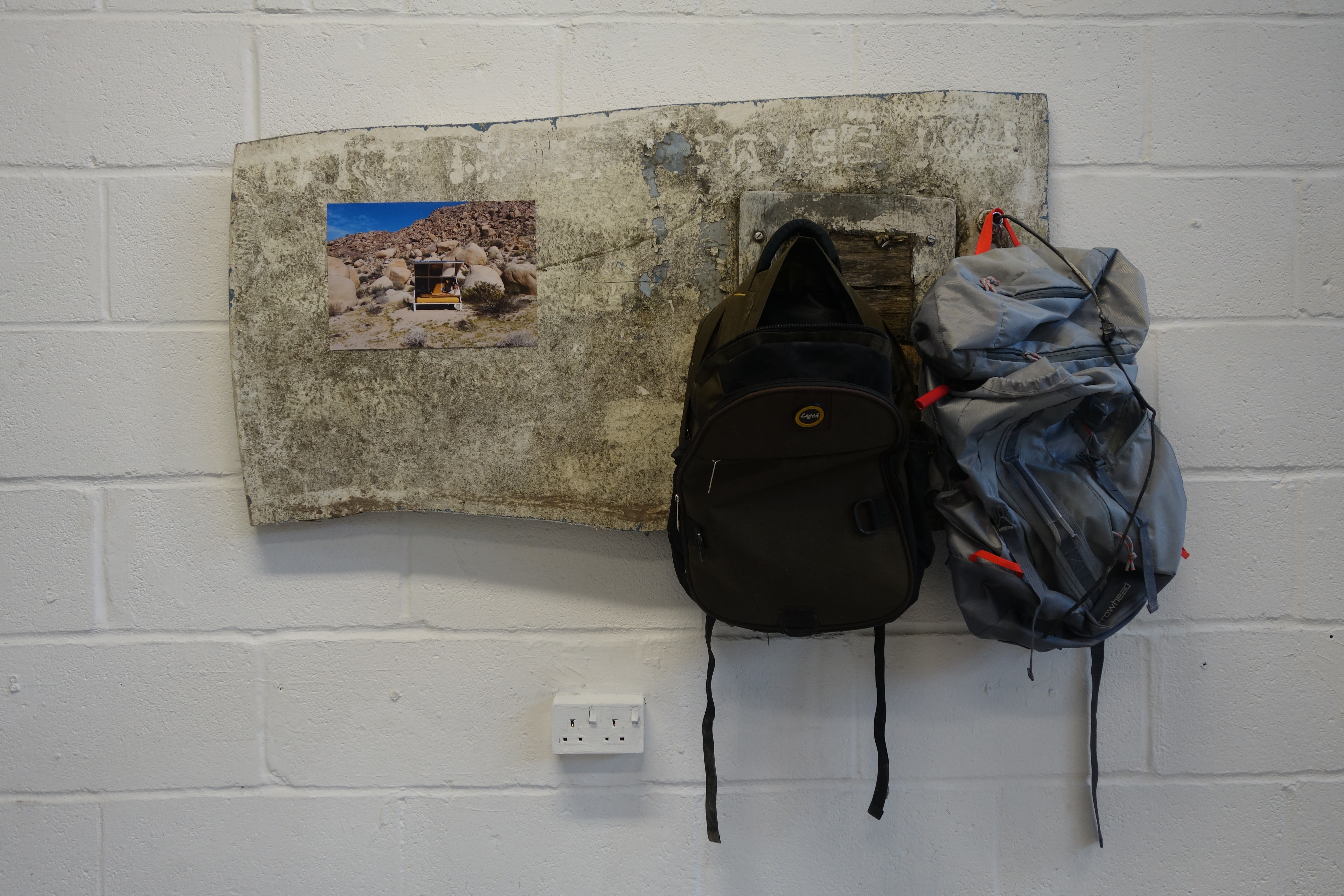 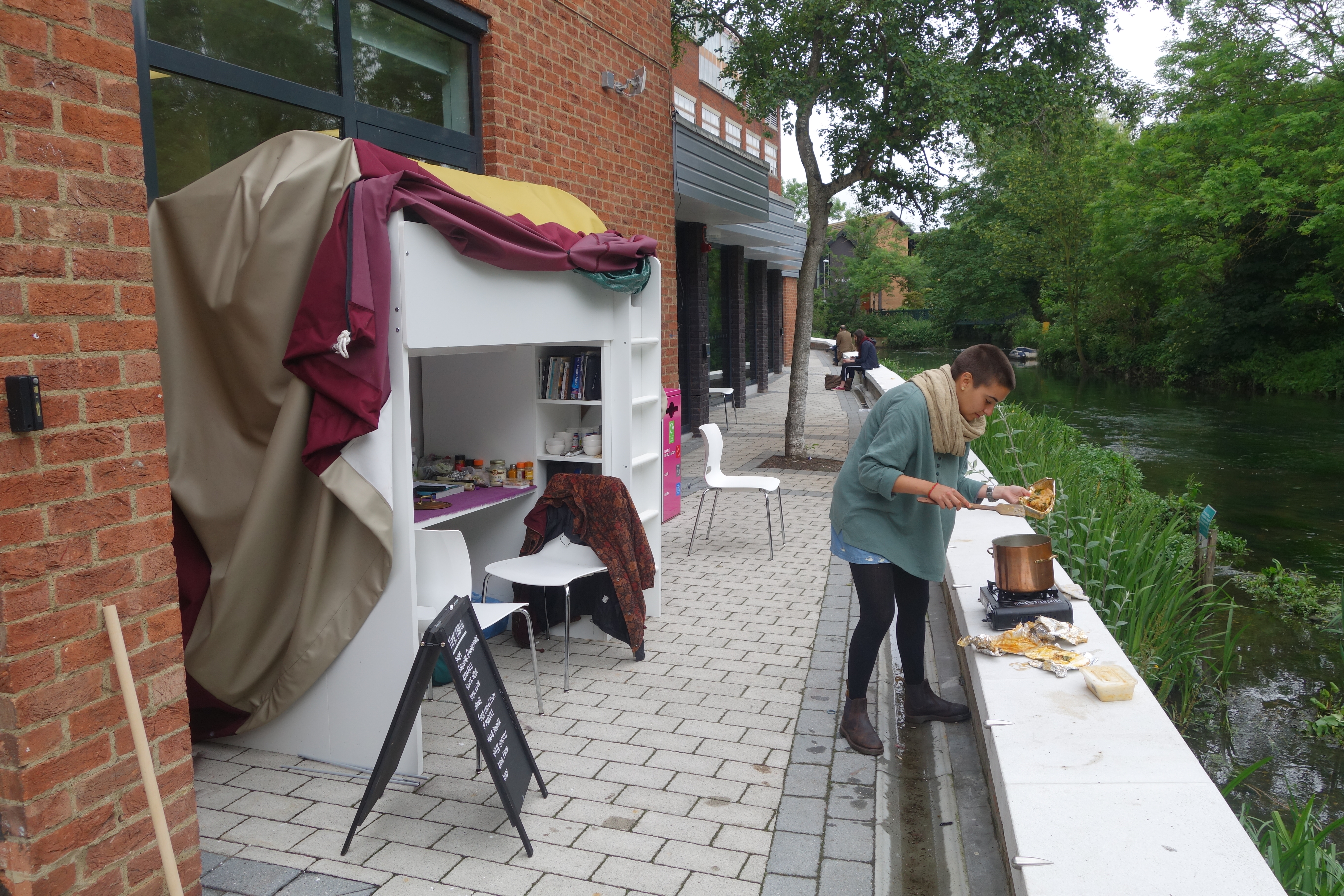 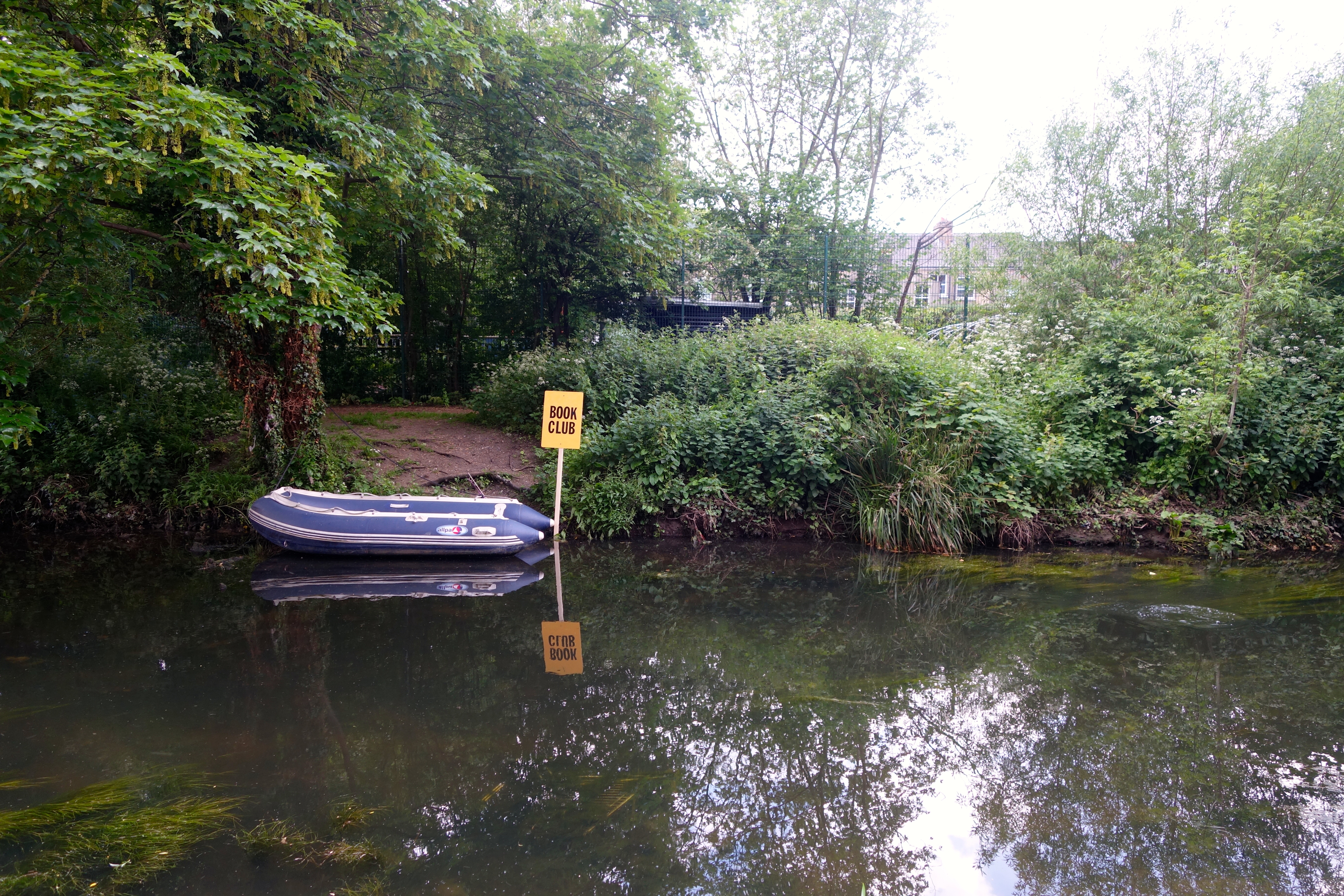 There’s a lot to grasp, I know, but it works well in order to completely blur the lines between art and life. The quilt piece I made in the desert relates to the bed I’m sleeping in in the ‘house’; the bowls relate to the desert and the objects we’re eating out from in the ‘house’; the backpacks refer to the notion of home, and inside are all the clothes that I own (which I am now using while living in the ‘house’, and are available for people to take); they are displayed on a piece of wood from my houseboat that has a photo of me in the wagon stuck to it; and finally the Wandering Book Club floats on the river! Wow, so much information! What do you think of it? 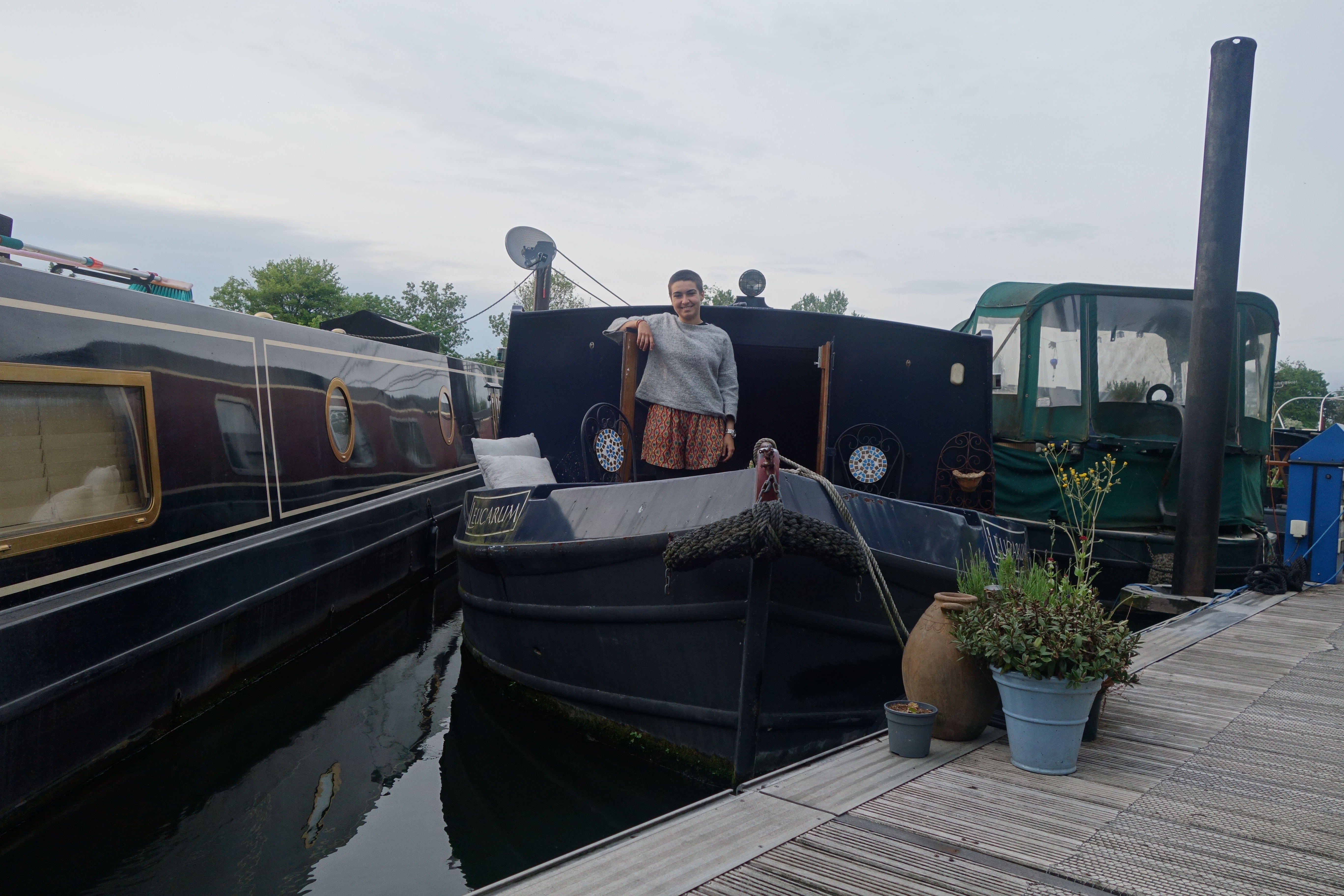 The home struggle has definitely become an important part of my research, but since everything has started to feel like ‘relevant research’, I’m a bit overwhelmed by the meaning and direction of my practice. I have made a radical change in my life once more and I’ve officially moved out of the houseboat. I felt I wasn’t being faithful to my quest of finding a meaning to home if I was still paying rent and had all my stuff stored safely in one place. It was heartbreaking telling Vinny my decision though… He’s been such a highlight of my Kingston experience, almost like a brother or a father to me.

I have also broken with many other things in my life this past week and it seems that all the pieces of the puzzle are falling apart only to fall back into place in a few months time, hopefully. I have decided that I will stay in India for two more weeks than expected in order to visit Auroville, have you ever heard of it? It’s an experimental township in southern India.

I knew RULA had been pretty busy lately thanks to your many Facebook updates, which tend to be unusual. They seem like such a fun group! I miss your house… Your hair looks super! Much less electric than other times, very creamy and subtle colour changes, I love it. I have to agree with you in relation to portrait/landscape photographs… I only ever take landscape photographs. I have just rescued for you some horizontal portraits I took while being in Shanghai, what do you think? 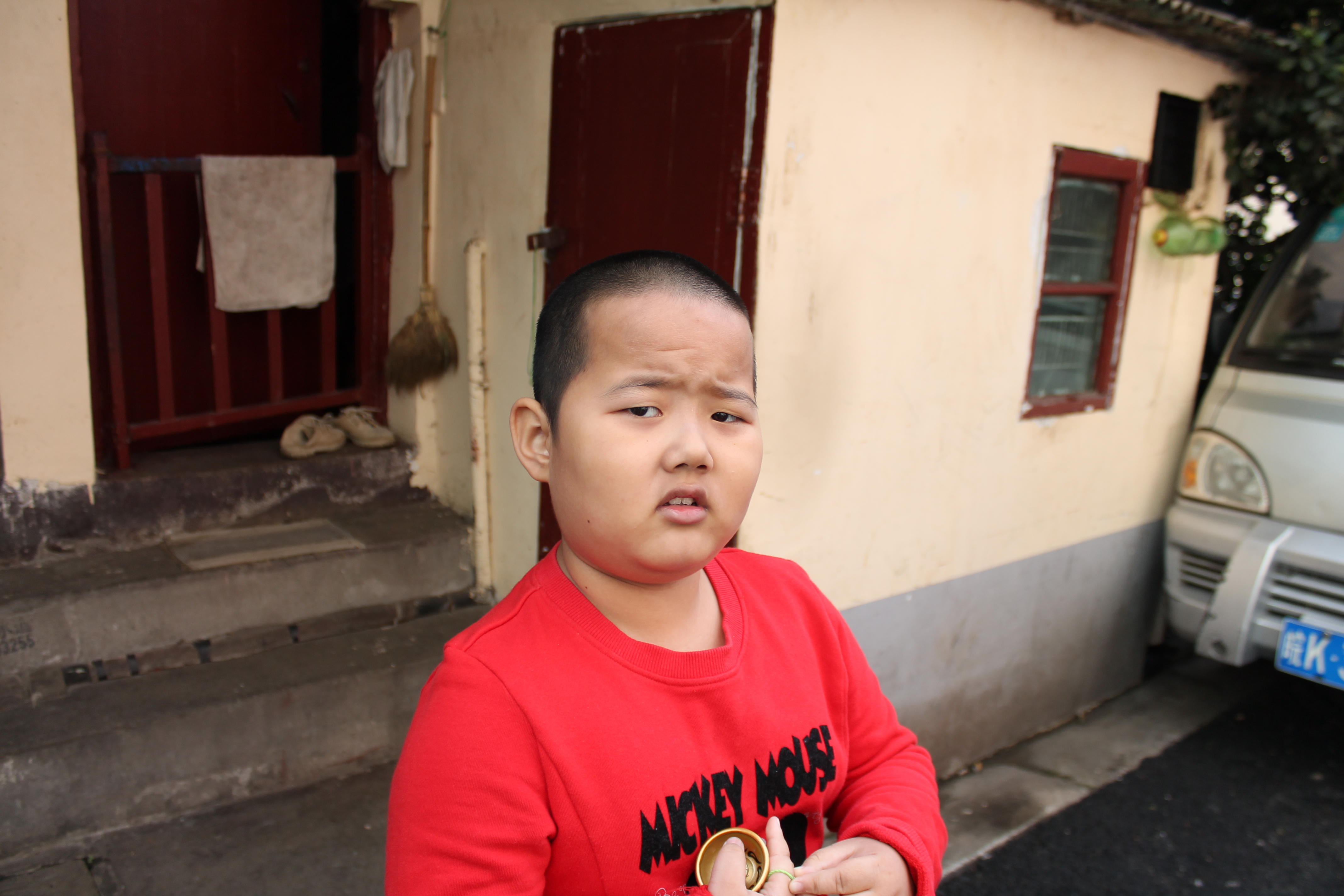 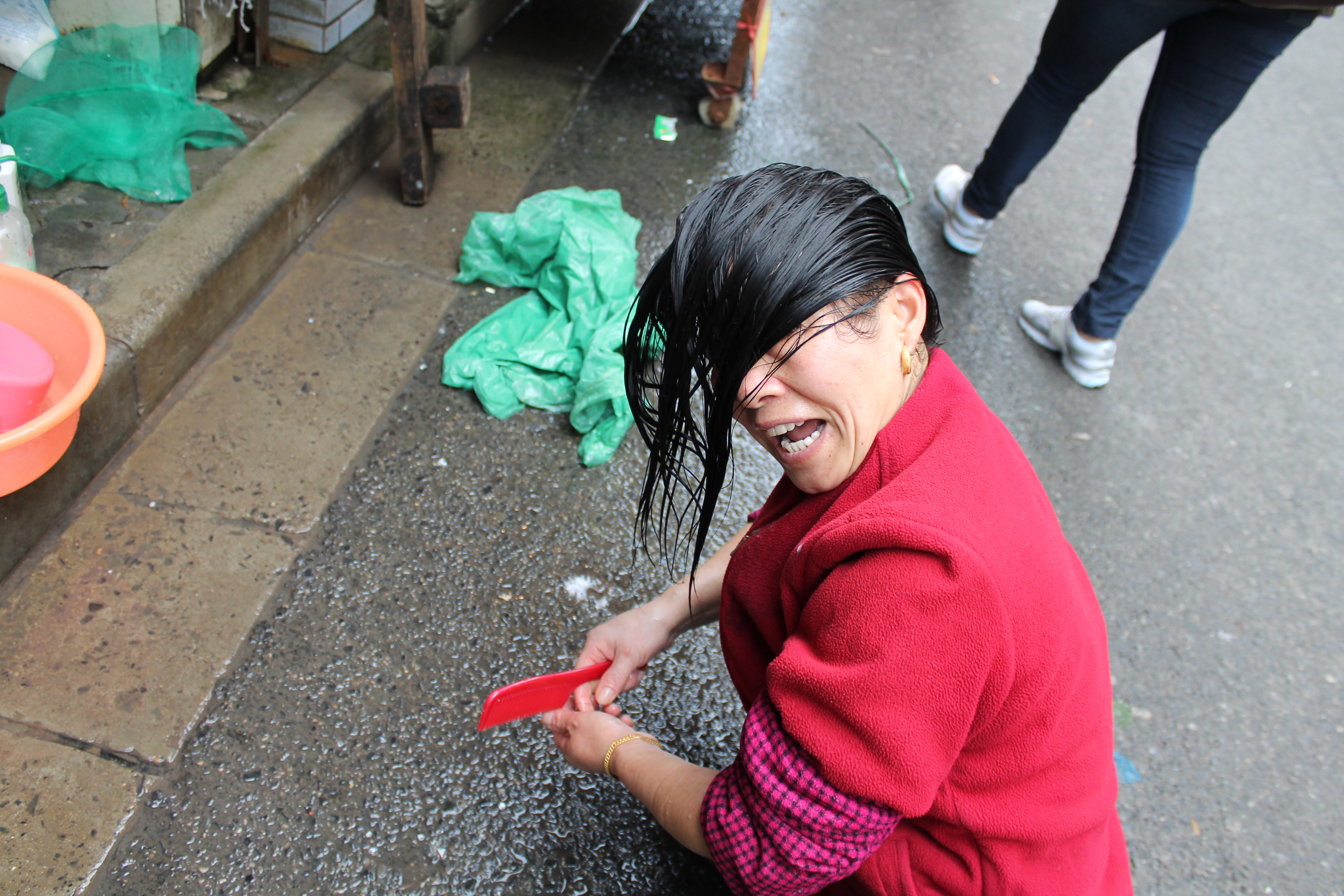 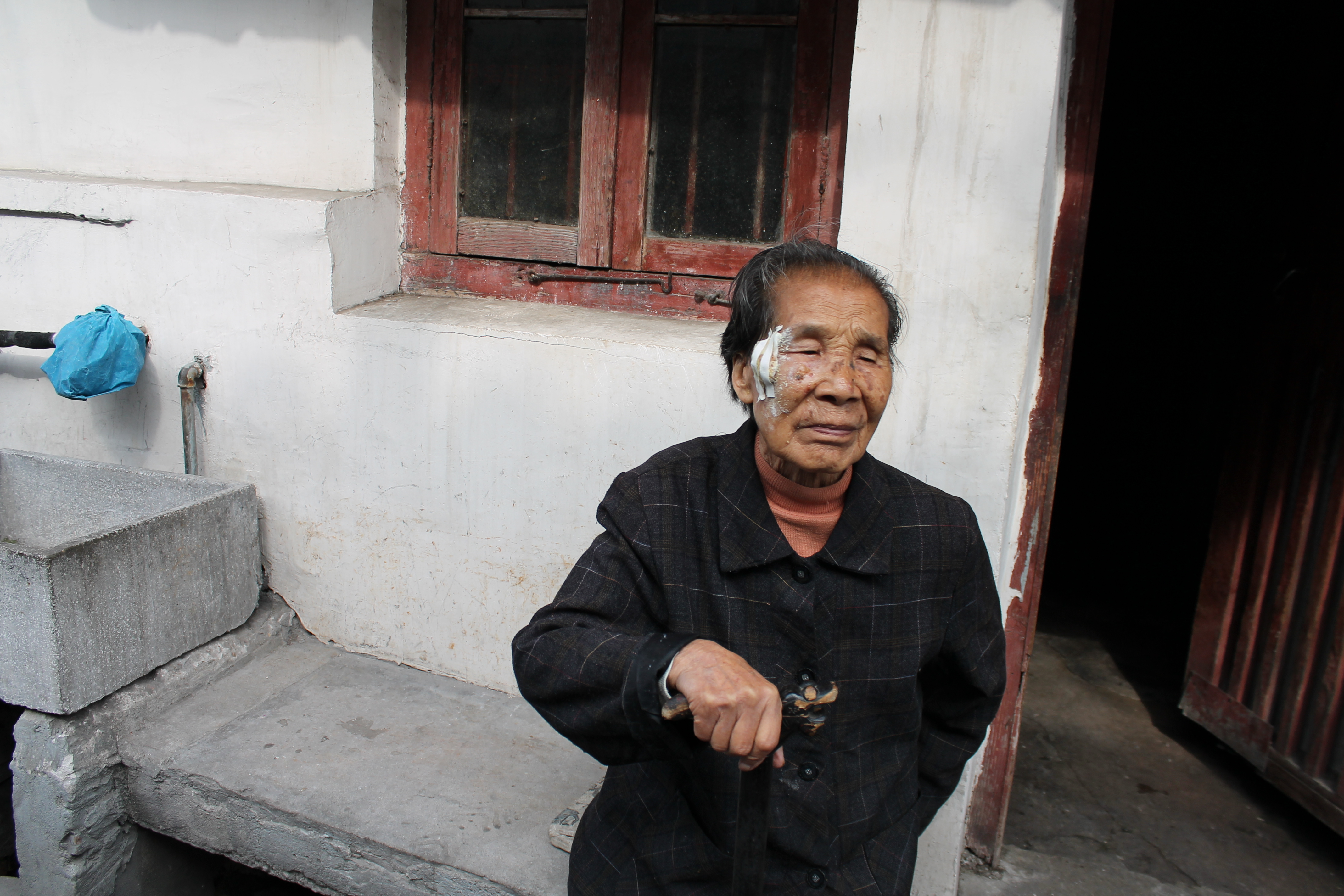 I really like the photographs I took in China – I became obsessed with photography while being out there, however I never really did anything with them – most people have never even seen the pictures.

Tamara’s model looked gorgeous! What a treat to have such beautiful and creative people use your garage as a backdrop! I really love the new RULA website, everything is much more clear and navigation is so easy! Great. I’m very proud of you for not creating a new website for the Location::Sensation project. Does it feel like it’s less important just because you didn’t? I have read your See Eyewear post in Agentof.ch/aos and I love it. I’ve actually many times wondered whether if you had always been a fan of glasses. I was surprised at how many pairs of cool glasses you had and how easily you decided to buy the one’s I recommended. I was even searching for shops in London to buy the pair of Mondo’s that I liked, burgundy-copper colour (!), but I couldn’t find any! Contact lenses are getting truly boring after meeting you… Since then I’ve started to think that glasses have so much more personality!

How are your online classes coming along? I can’t grasp the concept of doing an art course online. It’s just too weird for me. I love projects in which you’re 100% hands-on involved, running around, making, discussing. I think I wouldn’t be excited by the idea of doing an online BA! Having said that, my friend is currently doing her MA in Graphic Design online and she loves it. She feels like she’s learning much more and way faster. Have ‘peeps’ become interested in meeting each other, even if it’s on the web? Or do they secretly stalk each other on F *c *b *k and that’s about it?

What you say about 62 Suns is interesting. When a project becomes a pain and a purpose at the same time, it finally marks a fine line of your identity. I feel like that now. I would never live 24h stuck to someone like I am with Nicole, however it seems that because we are doing it for artistic reasons, we are willing to go all-out with it. We haven’t separated for almost two weeks or more, and we haven’t had a single problem. I sleep stuck to her almost every single night, and it’s still as fun as the first day. 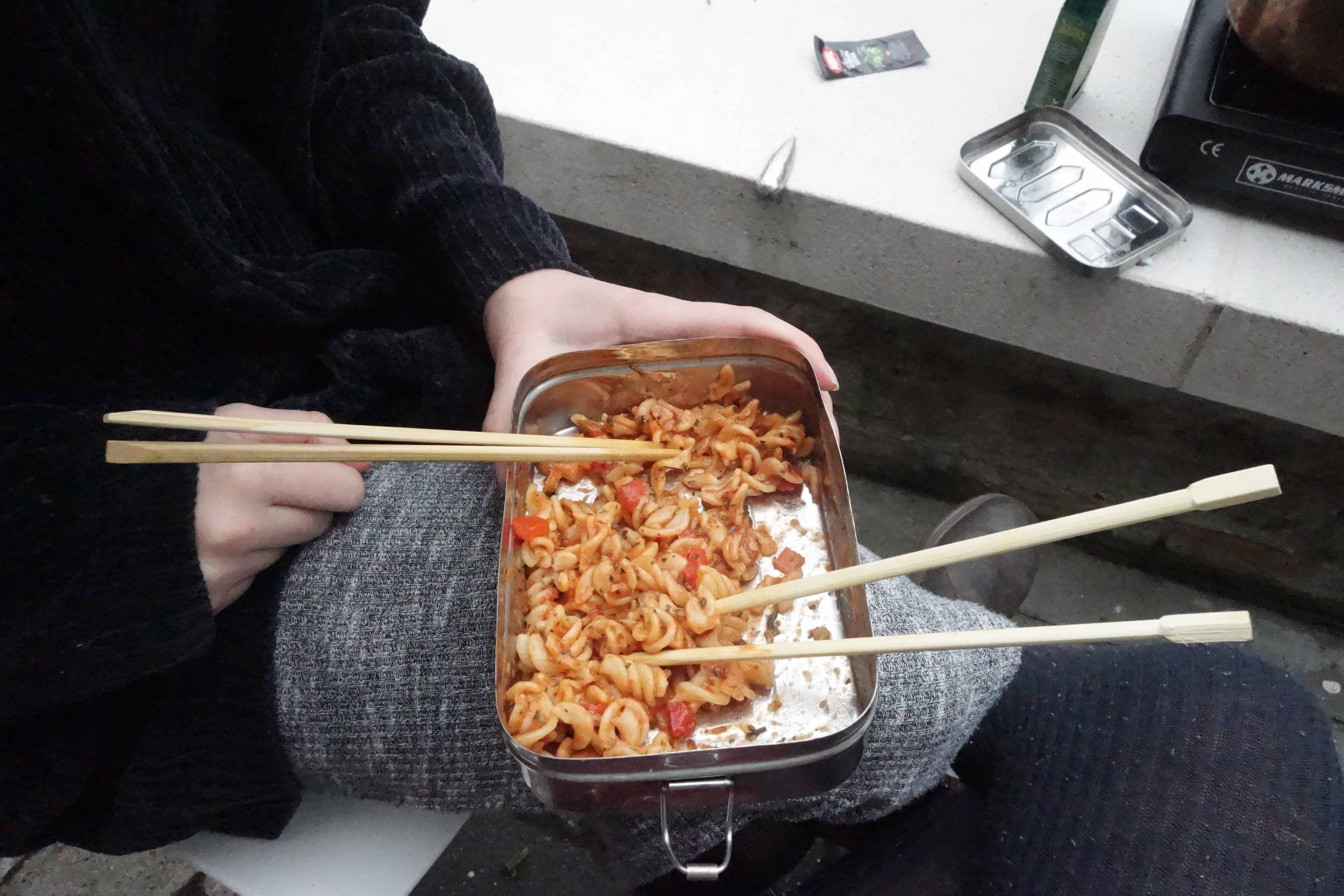 For this reason chopsticks have become a big part of the project, and it turns out that Andres (the guy we CouchSurfed with – it’s all on Hippie Picasso) also only ate using chopsticks. He told us the philosophy behind using this pair of wooden sticks and it was so interesting. Unlike a spoon or a fork, chopsticks always stay together, side by side, they’re very ‘loyal’. Nicole and I have been living together and supporting each other to reach the maximum out of our life/art purpose. We haven’t let selfishness interrumpt the relationship and the sense of stand-alone break the bond between us. We symbolise ourselves and our project in the pair of chopsticks. 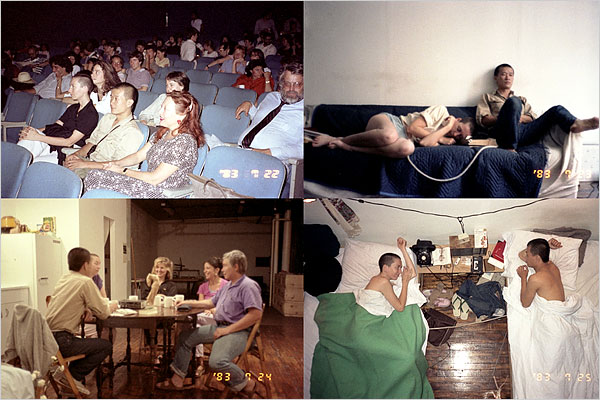 I don’t know if you’ve ever heard of Tehching Hsieh’s one-year performances, but the one called Art/Life (1983-1984) really reminds me of our project. Him and Linda Montano were tied together for one year using an 8m rope – it’s incredible.

Yes, William is the artist from Arizona, but I won’t be able to go to Arizona for now. However I have a place in his studio for whenever I want to go. There has been no previous official studio exchanges, so William is the first one. I’m finding it a bit hard to keep up with all the projects I’m involved in though, I can’t be everywhere at once and I feel like I’m putting more effort and attention to some more than others. 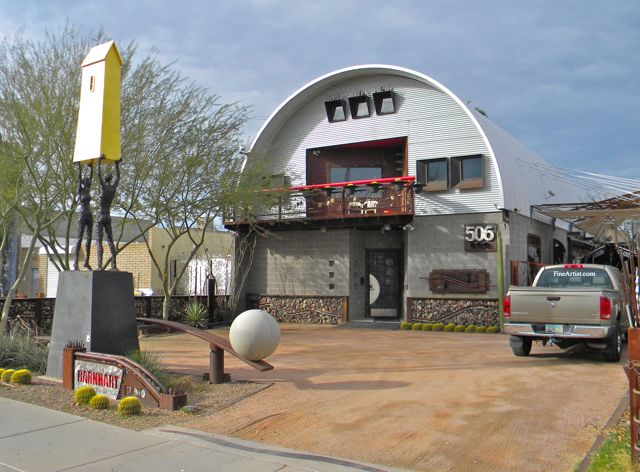 I totally agree with Robert when he says blogging is narcissistic, however I guess it all depends on the things you write about. Writing a dairy is not considered narcissistic however why when we publish our thoughts online they become vain? I guess the language used and the way we portray our lives to the world is slightly different to what we would write in a diary, but I think that getting your life out there can truly inspire many individuals and encourage them to do similar things in life. Is conversing narcissistic? Blogging is simply conversing online, and sometimes it’s even better because it counts with that extra time and distance that allows it to become more relevant and critical. Yes, thinking live! Isn’t that what blogging is at the end of the day? Isn’t being a lecturer narcissistic? What’s the difference? It’s the same quality of confidence at the end of the day.

Finally I have come to realise that the “she who has the most likes, wins” mentality is reflected in people who have followed an image of themselves through. For us who jump from project to project and feel excited and intrigued by everything and nothing in life, it’s difficult to remain in one place for long periods of time, thus our followers feel lost and disappointed, or a little overwhelmed by so many changing and ever-evolving ideas… Don’t you think? 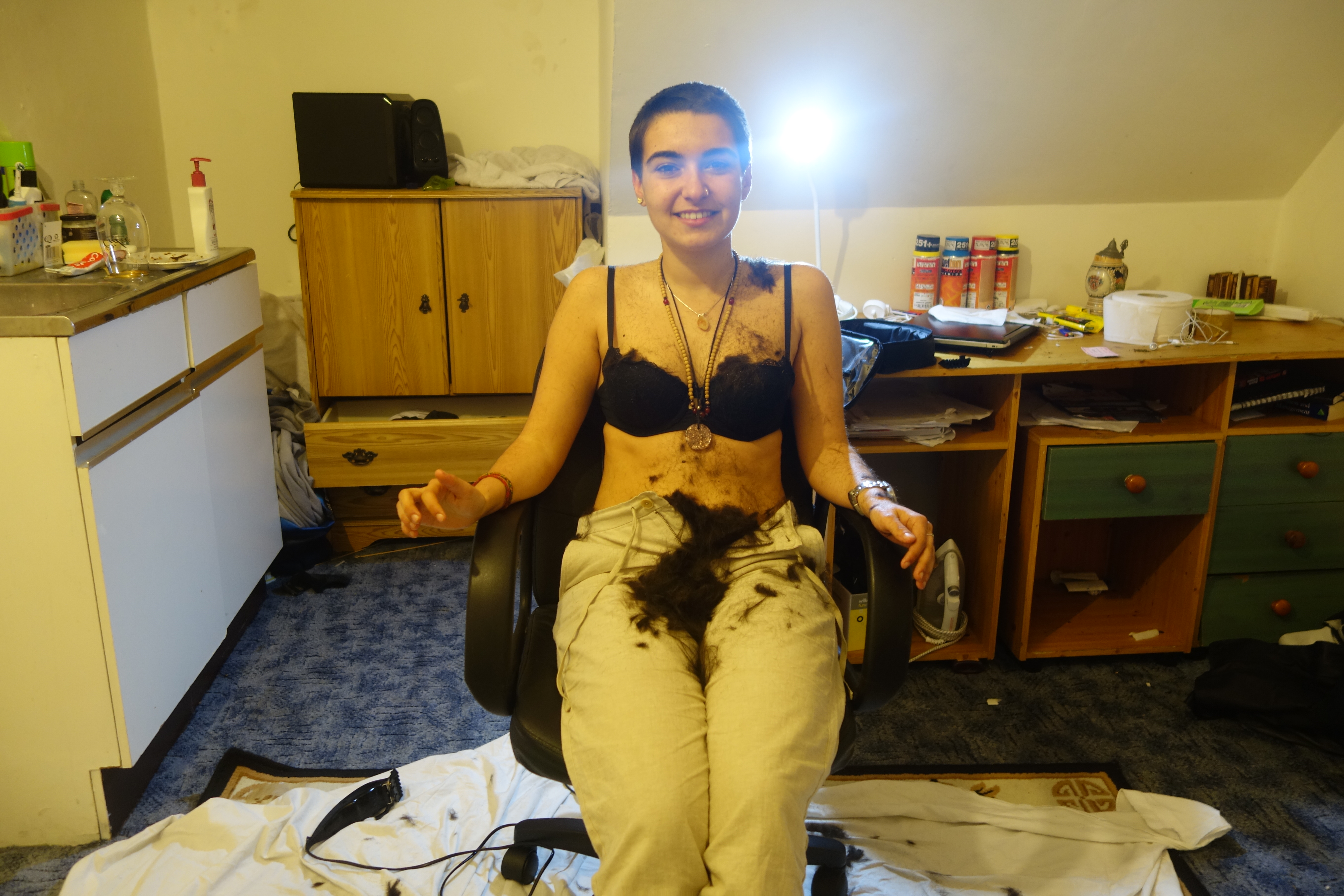