The other day I encountered this Facebook message from you. 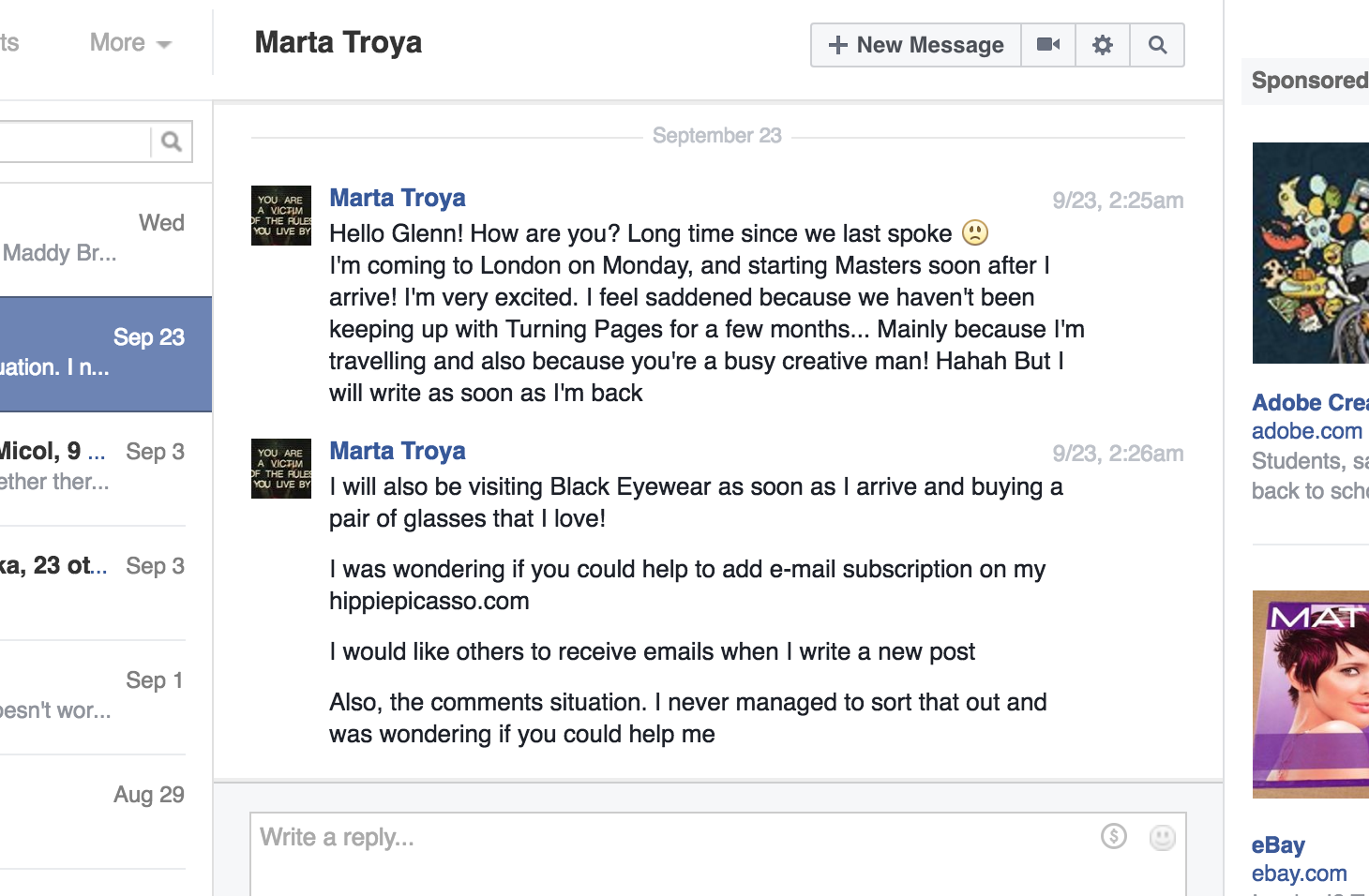 It’s a perfectly reasonable message. Who doesn’t get our overload here in 2016! Our Dance Cards are so overflowing it’s a project just to try to do all that dancing!

Still it was kind of funny that we created this letter writing space to have a sort of richer-than-Facebook communication, only to fall back to FB when it all became too busy! 😛

As you already know, my solution to most things is to create another website. And I’ve taken the liberty of creating another one for us! See what you think: 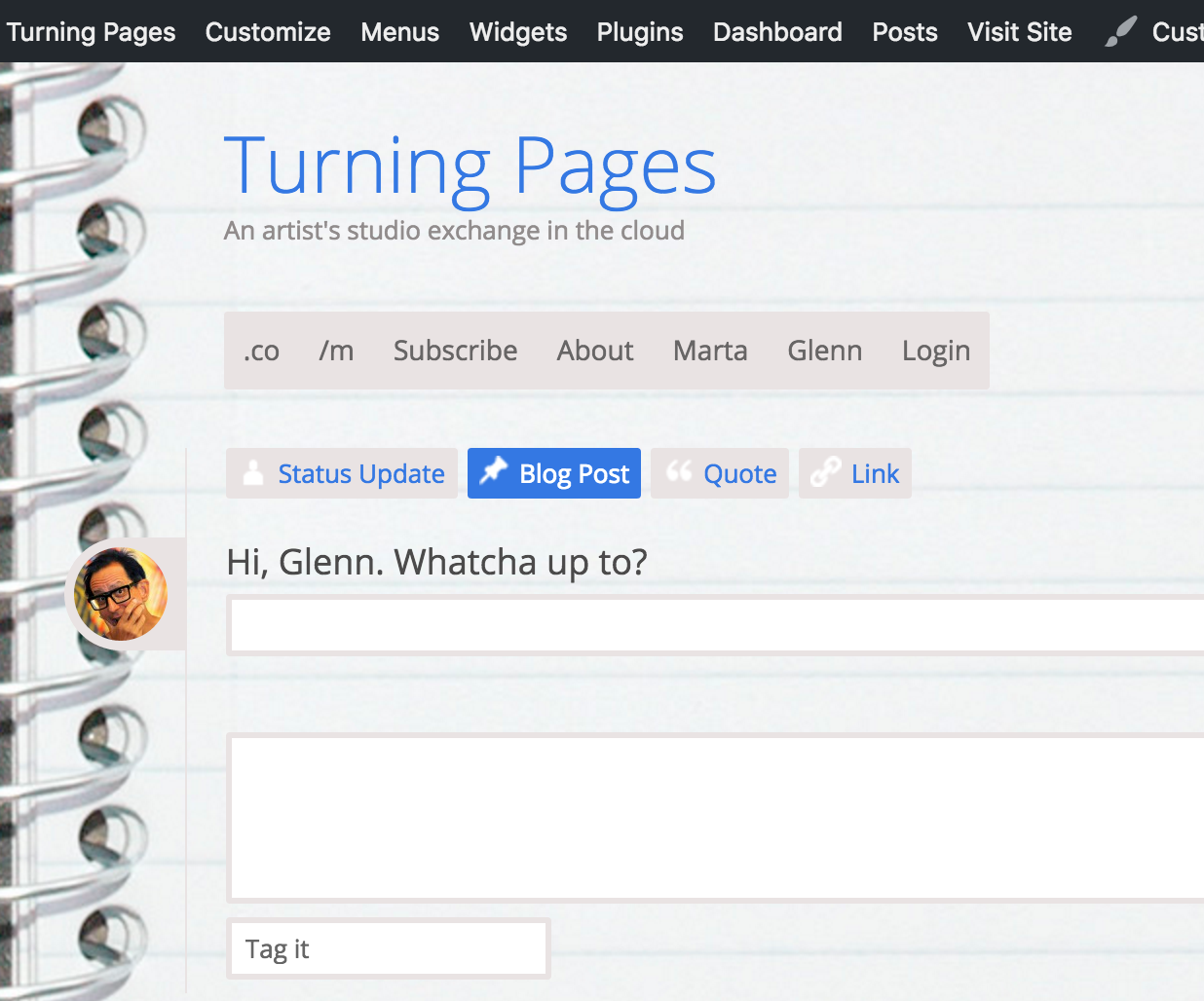 You can check it out and we can use it a lot, or a little, or none. Whatever you think. If you do want to give it a try, of course we can modify/adjust the look and function of it in any ways that make sense to you.

The thought is that we still might use .co for “real” letters of some length and thoughtfulness. But that just as you inevitably found yourself turning to FB to “update” things, that the /m site might be a nice place just to share a thought, or a moment, an idea, a question, or a pix. The /m site uses a Front End Editor, meaning that you don’t have to go to the Backend Dashboard, Post Editor, etc, to say something. You just type something in the Hi Marta, whatcha up to? box and click Post It.

My summer 100% online class went really well! Some students will always prefer online classes, but I think especially in summer it makes a lot of sense. I had one student go home to Hong Kong for the summer, and another home to Stockholm, and both were able to work on their degree even as they were back home.

Most students stay in the SoCal area, but many seem to travel over summer and they love the flexibility. I had about 5 optional meetups for anyone around the area and those were great. We had meetups at Venice Beach, Seal Beach, the CSULB Japanese Garden, My Place, and The Broad. We used WordPress & Slack and it was a pretty interactive experience.

They made some Automatic Drawings like this one by Linney Sar.

Stephanie Valdivia made a zine that was angry and funny all at the same time.

Adriana Maciel used our Landscapes with a Corpse activity to express the drowning feeling she’d had after breaking up with her boyfriend of 2 years.

We went to Seal Beach to try some plaster casting. Here’s Allison Cruz with a casting of her foot.

As I think you know, my students write blog posts about their work. Like the work above, and also about experiences like the one with you. They also visit the 5 student art galleries at the CSULB School of Art and have conversations with artists.

My students are mostly freshman & sophomores, and mostly non-arts majors. I’ve tried to give them some guidance and structure for their Artist Conversation writing, but obviously it’s not at the highest level.

A couple days ago I was politely asked by the Director of the School of Art not to have my students post their work online. She said that some in the SOA had complained that the writing wasn’t good enough.

I just googled “CSULB School of Art” and nothing from my students come up in the 1st 7 pages of search results. However, if you search on individual student artists names, my students work often comes up on page 1 of the results.

It’s actually reasonable that these “class exercise” writings not be up on the public web. Still, it bugs me that so many peeps in the School of Art have little or no content whatsoever online. When my students post something, instead of being motivated to post more and better content, they just ask to have it taken down. Instead of a rich, robust information space, they seem to prefer silence.

There’s no perfect answer here. Bad, or not-so-great writing online isn’t a great thing. I’ve tried to remove the worst mistakes: spelling, grammar and so on, and to structure the writing to be cleaner and more insightful.

If there be time to expose through discussion the falsehood and fallacies, to avert the evil by the process of education, the remedy to be applied is more speech, not enforced silence.

This has always been my mantra. More speech. If you find a holocaust denier website, don’t bother trying to have it taken down. Don’t bother arguing with them. Go interview a holocaust survivor and post that.

The School of Art isn’t wrong. I just wish my student’s work wouldn’t even come up in Google search results because the artists and others were posting so much great material that my students were buried on page 10 or someplace. For many, less speech just seems to seem easier.

The thing is these avatar works have been performed under avatar identity, so to claim that work is also to out the avatar artists, or to some degree, to deny their autonomy.

Lots of artists do eventually claim work performed by their pseudonymous identities. Rrose Sélavy probably most famously of all. But Rrose was largely Marcel Duchamp in drag. I don’t think he was taking too much from her by claiming authorship of her works.

You could say that avatars in virtual space exist in cartoon worlds, but they also inhabit rich, 3D spaces filled with other avatars who hail from many countries and many continents. As these often pseudonymous avatars interact with each other they create new communities and new cultures. Somehow a fleshvatar like me suddenly claiming authorship for an avatar’s work feels wrong. Like a parent in the bleachers who, on seeing their child hit a home run in the little league softball game, bounds onto the field and takes a bow. That parent’s invested a lot of time and money in the development of that child, but it’s still the kid’s home run, not the parents. And parents generally don’t bound onto the field, they’re content to sit in the stands and admire what their progeny has achieved. 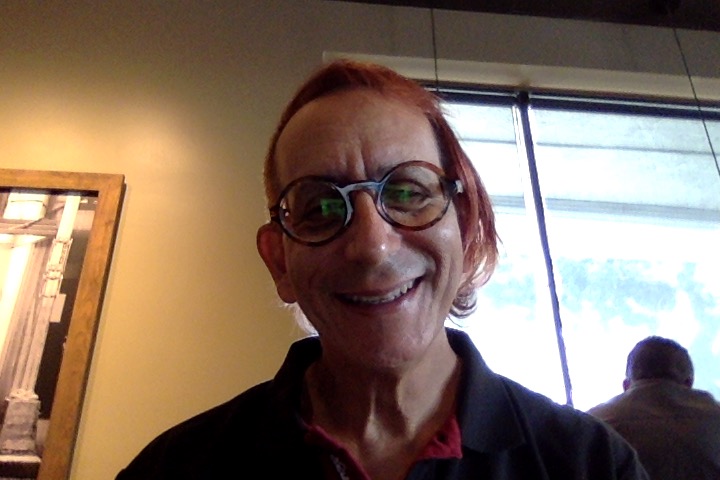 I’ve been thinking about what to do with this avatar work and sitting here yesterday I think I decided to just let be it’s own work by the avatars who created it. Then I went down to Newport to kayak for a couple of hours and then I found myself in a bookstore while waiting for my fish tacos. 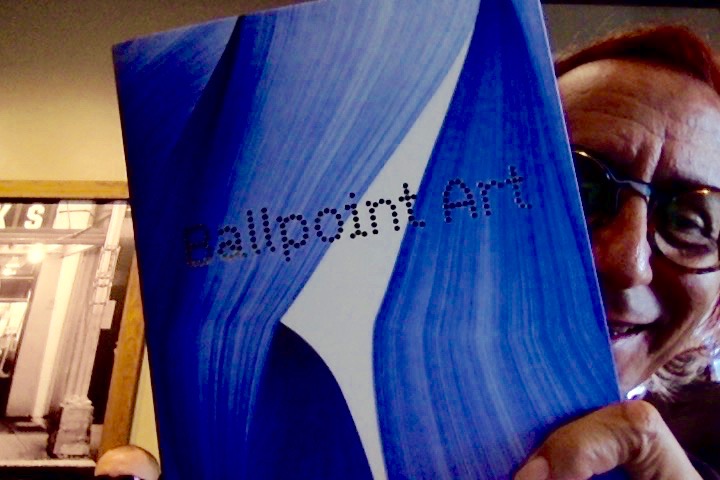 I found this fantastic book Ballpoint Art, by Trent Morse. The cover you see in the photo is a zillion lines, and probably a zillion hours, of drawing with a ballpoint pen by Thomas Müller. I bought the small, elegant volume and took it home.

Only reading it this morning did I come across the section on Butt Johnson. His work is pretty interesting. I was even more fascinated to learn that Butt Johnson was a pseudonym the artist invented around 1998. Ballpoint Art describes the name as being invented as part of a “fake art movement” he was creating, and that he liked the freedom and fluidity of a degree of remove from biography.

I was trying to get at a more flexible artistic identity as a student. So for my 1999 (or was it 2000?) year end critique I shaved my head into a bald cul-de-sac and wore a cheezy suit from a thrift store and told them my name was Butt Johnson. They actually got pissed at me, which I did not expect, and the critique of my work did not go well. I later posed in this costume again a year later for another performance where I made up a biographical history of Butt Johnson…which was pretty well received. I haven’t appeared in public as the character since college, but I’ve continued to make artwork under this name…and I think it’s come to represent something entirely different, and definitely not what I expected those 10 or 11 years ago. I may end up looking like Butt Johnson someday, but I don’t think I’ll ever be him again. 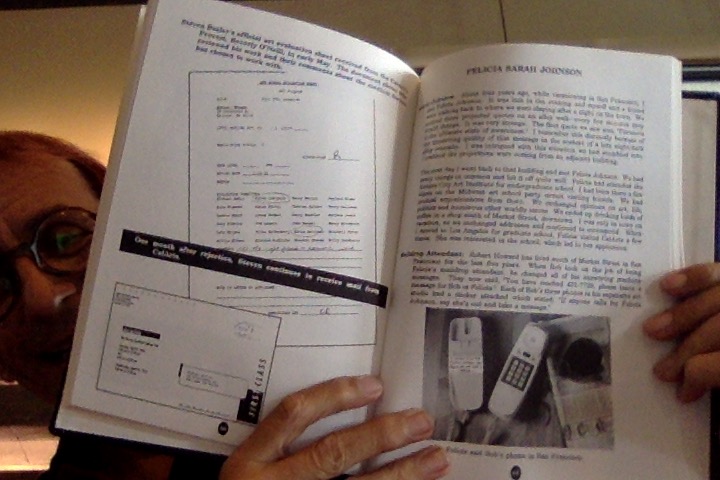 Then I ran to my bookshelf to grab my copy of The World is Getting to be a Funner Place, or how I applied to CalArts under four aliases and was accepted or denied. The book is, as the title suggests, Burt Payne 3’s creation of 4 artist identities: Rita Thompson, Donald Ross, Steven Butler, and Felicia Johnson. All 4 identities applied to various BFA & MFA programs at CalArts.

Back in 1991 when they applied, it was a time of snail mail and landlines. Burt Payne 3 created an elaborate network of mail drops around the United States so that materials could be mailed from the appropriate cities and telephone numbers would have the correct area codes.

After musing over all this thought provoking work, I still think maybe I should let the avatars own their own work while I simply smile from the bleachers.

But across these many varied pseudonymous and counterfactual projects, there is so much energy. It’s an incredibly fascinating space for me. I think I should have some sort of engagement with this space and some of these ideas.

If what I’ve said makes any sense to you Marta… what do you think!? 🙂

A Passage to London

Are you back from India?

Have you started your MFA program?

What are you working on??? 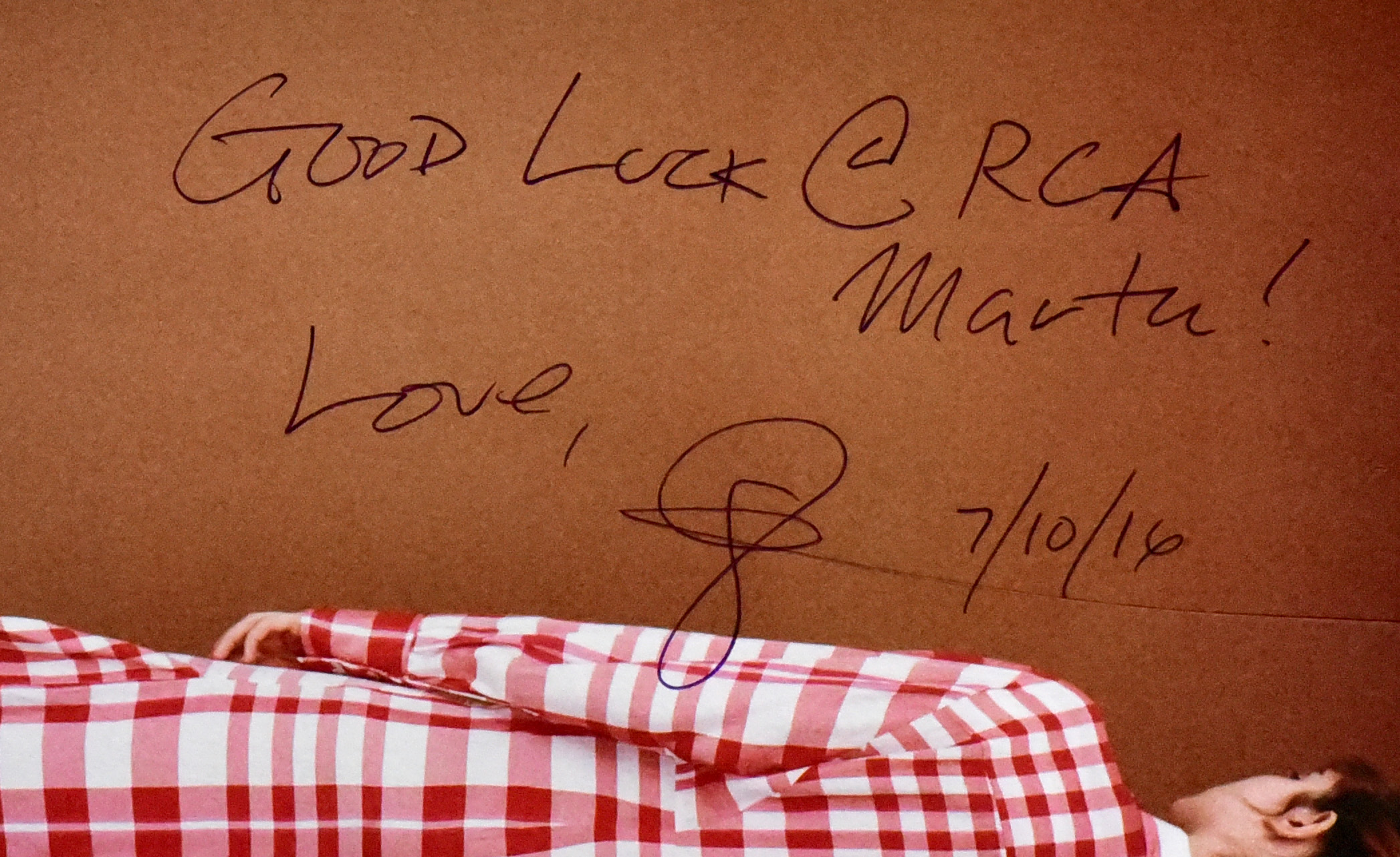